I have written about this before, but not in two years, and with lots of new clients and a couple of new Savvy services in that time, it seemed like a good time for a biennial review.

The comedians are fond of saying, “Timing is everything.” I think the quality of the material is pretty important, too, but I guess their point is that bad timing can ruin good material, and that comedy is a performance art. You might expect an article about timing from the analysis side of Savvy to be about mags, flame fronts, degrees before top dead center, and getting the most bang for the buck from your engine. This one, though, is suggestions from us about how to get the most bang for your buck from SavvyAnalysis.

When To Upload Flight Data

Let me remind you that all flight data uploaded by Savvy Mx, Savvy QA and SavvyAnalysis Pro clients is scanned for the EGT signature of a failing valve. That happens without you having to ask. If the algorithm is triggered, we visually inspect the data and if we’re confident that the data is not bogus we will notify you. That’s true whether you’re an Mx, QA or Pro client. The FEVA scan has been at work for about five years now, and we have spotted and reported the pattern to dozens of clients. 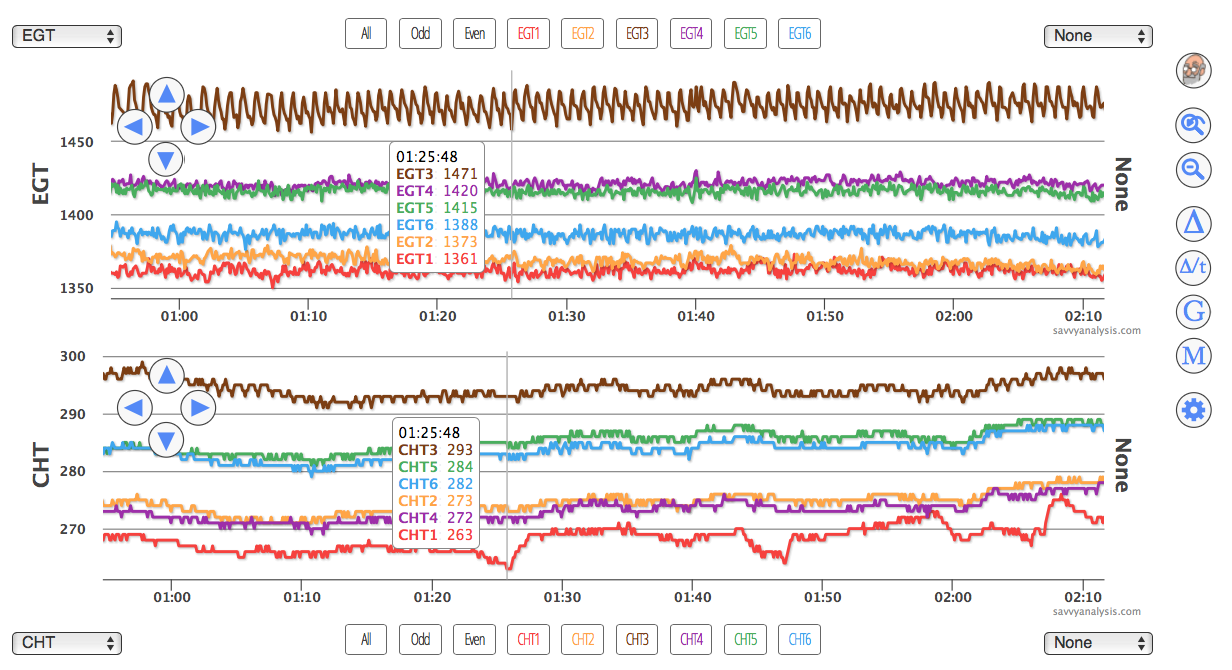 So if you’re a client who only uploads flight test profiles and anomaly flights, but not normal everyday flights, hopefully the automatic FEVA analysis gives you motivation to upload more regularly. Having more data to look at is also helpful when we’re trying to spot the onset of some anomaly, like all of a sudden CHTs are higher or FF is lower.

It’s hard to quantify, but clients tell us that access to an airplane’s historical flight data can be a factor in pricing an airplane for sale. Makes sense – if you’re looking at two similarly priced airplanes and you can see the operational history of one but not the other, go with the devil you know. We routinely write analysis reports for airplanes in the Savvy Pre-buy program, and one of the things we look at is long gaps between flights. Was the airplane really not flying during that time, or was it flying regularly and we just have gaps in the upload. Could tell from the tach, but the data might give the wrong picture.

If all that isn’t reason enough, many of you have seen Savvy Report Cards, and more data means a more accurate report card. Last time I wrote about this, we hadn’t yet deployed Report Cards and Trend Analysis reports on demand. Those are now available to 74 cohorts — here’s the current list. A cohort is a specific airframe paired with a specific engine. We started with cohorts that showed the most flights available and have been working our way down the list. Noticeably absent are twins – we’re working on that now and should have several twin cohorts in a few months.

So if we’ve convinced you to regularly upload all of your flight data, when should you request analysis?

When to Request Analysis

There are popular airplanes, to be sure, but it’s hard to come up with a “typical” airplane. Even the popular models have different engine dash-types and other mods from year to year. But when we created SavvyAnalysis we had to imagine a typical owner/airplane scenario, and we had to estimate the amount of analysis that imaginary owner would need. Being airplane owners responsible for maintenance made that easier, and we determined that a full analysis report before the annual was a given, a partial analysis or two for some “rogue” event over the year was probable, and a check-up at about the mid-point between annuals was a good idea.

We also imagined that if the pre-annual report had identified a problem with ignition, induction or fuel systems, and maintenance were performed, it would be a good idea to request analysis for a post-annual flight to verify that the issue was resolved.

There is no limit on how many flights a Savvy Mx, QA or Pro client can submit for analysis. We made that choice because we didn’t want clients to view analysis requests as only being appropriate in an emergency or an anomaly. Obviously we can’t analyze every flight for every client, so we think the savviest of Savvy clients would request about two full reports and a couple of partial reports a year. 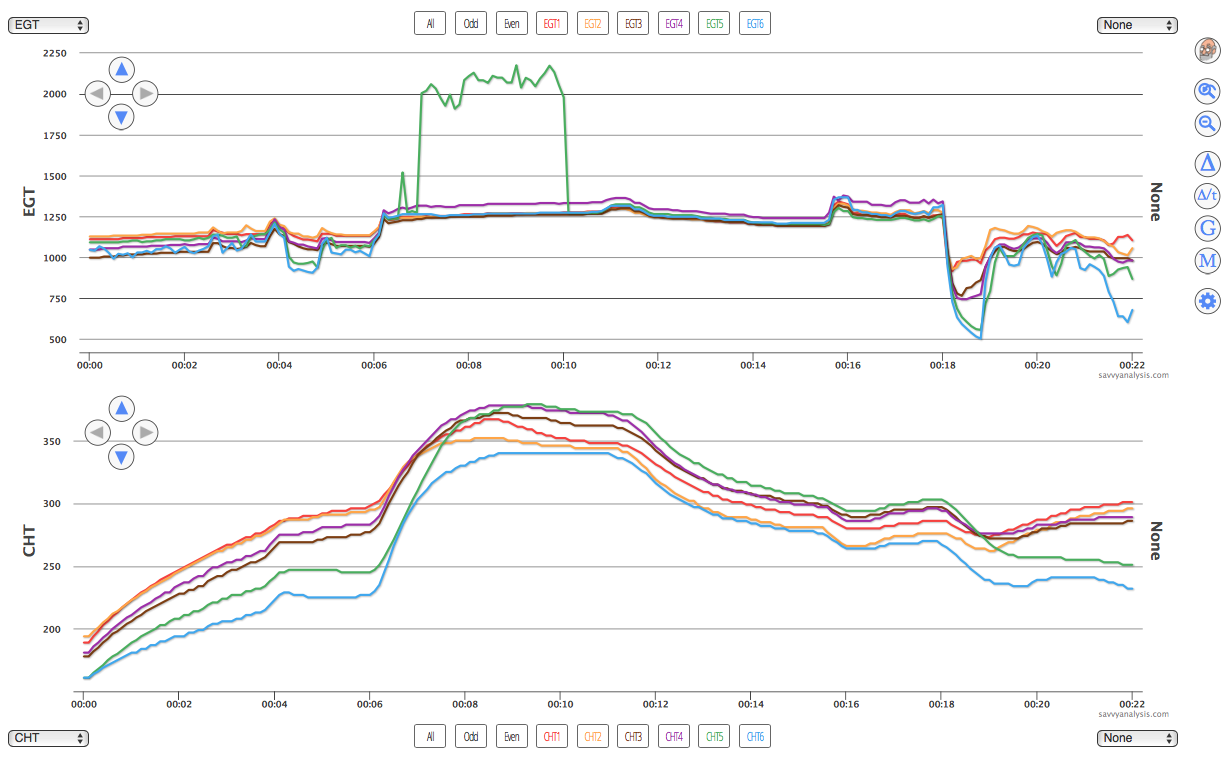 Questionable data is the most common example of a partial report. Let’s say you’re flying along and the engine is smooth as silk but some engine parameter isn’t right. EGT and CHT probes work in a hostile environment and failure is not unusual. Loose connections, particularly after maintenance, are also not unusual. So if you see something, say something. Submit the data with your concern about the anomaly, and we’ll look at other engine parameters which will usually rat out a probe or connection. In a case like this we would address the concern but not write a full report – unless you ask for one.

The next most common partial report scenario is an anomaly in performance. Some engine parameter isn’t right, and this time it’s not as smooth as silk. The best way to identify bad plugs and clogged injectors is the Savvy Test Profile.

When to Perform the Savvy Test Profile

The Savvy Test Profile is a series of mixture sweeps, and an in-flight mag check performed LOP at 65% power or lower. If you’re in smooth as silk mode – everything’s running great – the best time to perform the test is about a month before annual. It’s not like we need a month to look at the data – but starting that far out gives us time to gather more data if we need to. Once the airplane goes up on jacks our data gathering ends. So if you’re a week from annual and you still haven’t flown the test, better late than never, but the optimum time is about a month out.

Here’s a link to the expanded 7-page Test Profile.

Here’s a link to a digital version you can import into Foreflight.

Here’s a link to a printable Jepp-chart-sized version.

If you’re not in smooth as silk mode – you’ve got a rough runner – the time for the test is now. Don’t compromise safety, and if you need the closest runway, use it – but if you can safely gather data on the ignition system while it’s operational, that’s the time. For the LOP mag check, it helps to have 10 contiguous samples of data, so if your Avidyne’s sample rate is every 6 seconds, we like a minute of data. That’s asking a lot – to sit through backfires and vibrations for a minute – so give us what you can. But realize that one sample may not reveal the problem. If your engine data monitor allows for a more frequent sample rate, this is the argument for using it. If the rough running only shows up in LOP operations, then it would also help to have a series of mixture sweeps. 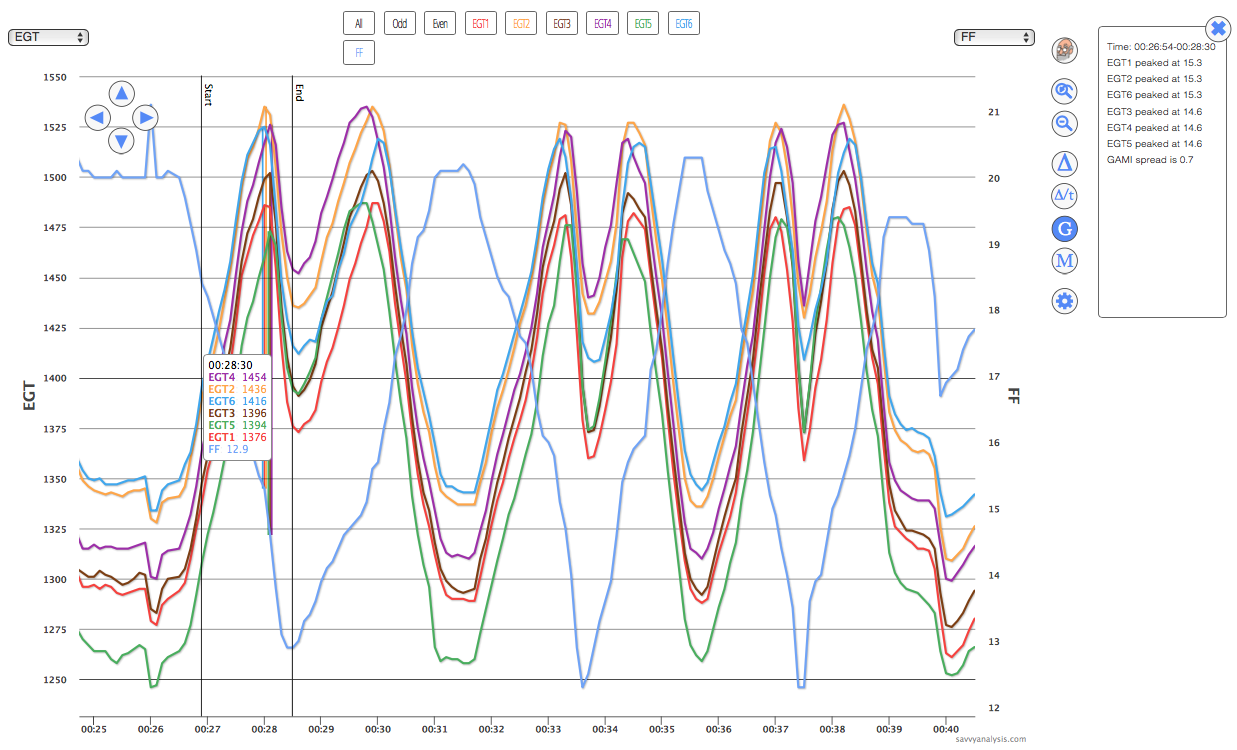 When we first started gathering mixture sweeps, we saw a lot of pulls that were too fast to use. The rate of change was too high for us to draw meaningful conclusions. Lately, the pace of sweeps has been excellent. Start 100 degrees ROP, lean to the onset of roughness, then richen back to 100 ROP. Smooth and steady.

Recently a client with multiple airplanes in a flying club reported that his pilots didn’t want to perform the test profile – that it wasn’t safe and was hard on the engine.

We think the diagnostic value of the mag check makes it useful for spotting weaknesses in the ignition system that are much easier to spot in flight than in the shop. Done properly, we don’t think it’s unsafe. You’re at a safe cruise altitude, you’ve presumably cleared the area for traffic and are concentrating on the test. We think discovering a bad plug or mag or harness is safer in that configuration than on takeoff roll into IMC. Running on one mag at this low power setting is not hard on the engine. TITs and EGTs will climb, but the test doesn’t take long and they’ll drop again when you’re done. As far as the mixture sweeps, you’re doing something you do on every flight. Granted, you’re doing it with more precision, and can be made unsafe if you go beyond roughness to flameout.

One last note on timing. Our goal is to answer analysis requests within two business days. We’re often faster than that – sometimes much faster – but that’s the promise we strive for. If you’re sitting AOG after diverting because of a runaway CHT, and you want help deciding if it’s real heat or a failed probe, check “Priority” in your request and we’ll move you to the front of the line. It’s the honor system and the Golden Rule applies.