In math, a conjecture is a statement you believe to be true based on observations. That sounds like something you could trust and act on. Webster’s says it’s an inference formed without proof or sufficient evidence. That sounds like conclusion jumping that you’d be inclined to dismiss. When we perform engine data analysis, we strive for the math interpretation of the word. It’s interesting that but for “ect” conjecture would be conjure, which is to evoke a spirit by means of magic or ritual. We hardly ever do that.

Analysts have an advantage when we’re looking at the data – we know how it ends. As pilots watching the data develop in flight, we don’t have that luxury, and have to make decisions about the safety and wisdom of continued flight by observing the data and comparing it to what we’re seeing and feeling. You could adopt a stance to land at the closest airport whenever any stream of data looks suspicious. You’ll log more landings, but are you safer than the pilot who can diagnose suspicious data, look for corroboration or refutation in other data, and distinguish reliable signal from noise? Our hope is that these Puzzlers can help you make smart decisions about what’s really going on with the engine, so you make safer decisions in flight and wiser decisions at maintenance time.

Let’s start with data from a Cirrus SR22 with a Continental IO-550-N and data from an Avidyne with a 6 sec sample rate.

All looks ok at takeoff. CHTs 2 and 6 are a little higher than the others, but still in a good range. By the 20 min mark they have fallen back into the pack. Not long after that EGT 6 begins a wobble, which gets worse over then next hour until it’s bouncing off the ceiling by the 01:30 mark. The starting point for our on-ground-after-the-flight analysis is about the same as what you would do in real time if you were flying. Ask three questions: Does other data agree with this anomaly? Does airplane performance reflect an anomaly? Does this probe have a history of malfunction?

In this case, CHT 6, oil pressure (not shown) and other data don’t support unusual combustion in cyl 6. Sometimes the analysis request arrives with a comment about airplane performance – sometimes it doesn’t. It helps us to know either way. For instance, “It was just as smooth after the strange jumps in EGT as before they began,” or “I don’t think the data is lying, it got rough just as the numbers started to drop”. In this case I would pose a conjecture that if there were roughness of the extent that the data suggests, the pilot would probably not have flown another hour. A quick review of previous flight data showed occasional spikes in EGT 6 data, so this probe went out with a bang and that was the extent of the problem.

Here’s data from a Cirrus SR20 with a Continental IO-360-ES and data from an Avidyne with a 6 sec sample rate. EGTs and CHTs are on top. Oil pressure and oil temperature are on bottom. 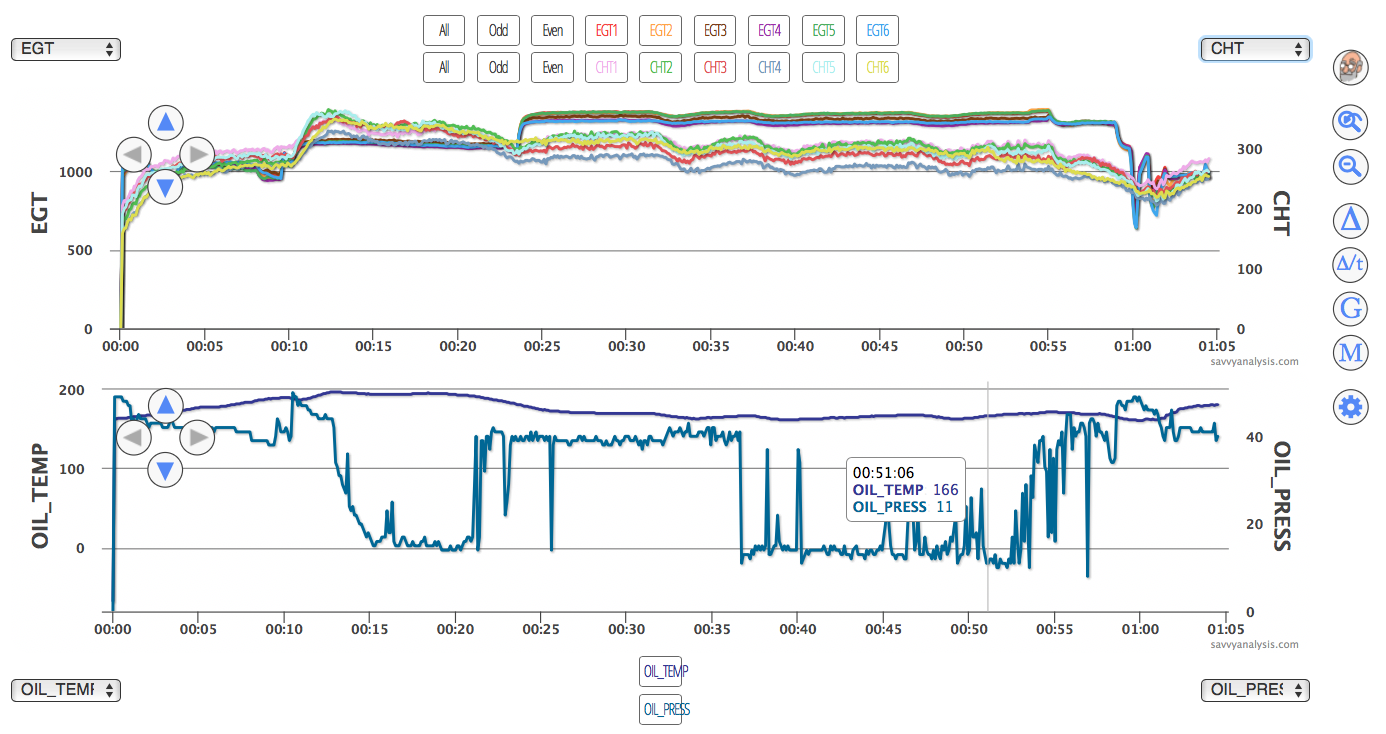 CHTs are noisy – EGTs aren’t – probably because those cables are near a hi-amp source. But oil pressure is the problem, and a big swing like this is certain to get your attention. Takeoff is about the 10 min mark and the climb ends at about 24 mins. During the climb, oil pressure drops into the teens, but EGTs are steady and CHTs drop a little, and oil temp is steady. As the pilot noses over for cruise, oil pressure jumps back to almost normal, then spike a little, then settles down until about 37 mins, when it mirrors what it had just done. Other data is still stable. Again let’s conjecture that if the pilot had sensed the type of roughness we’d expect from this kind of reading, or saw any streaks on the cowl, we wouldn’t be seeing that last 30 minutes of flight data. On this one there was no history of previous trouble. Since the data is about normal during ground ops and only acts up in flight, we’d start by checking the connection for the oil sensor. 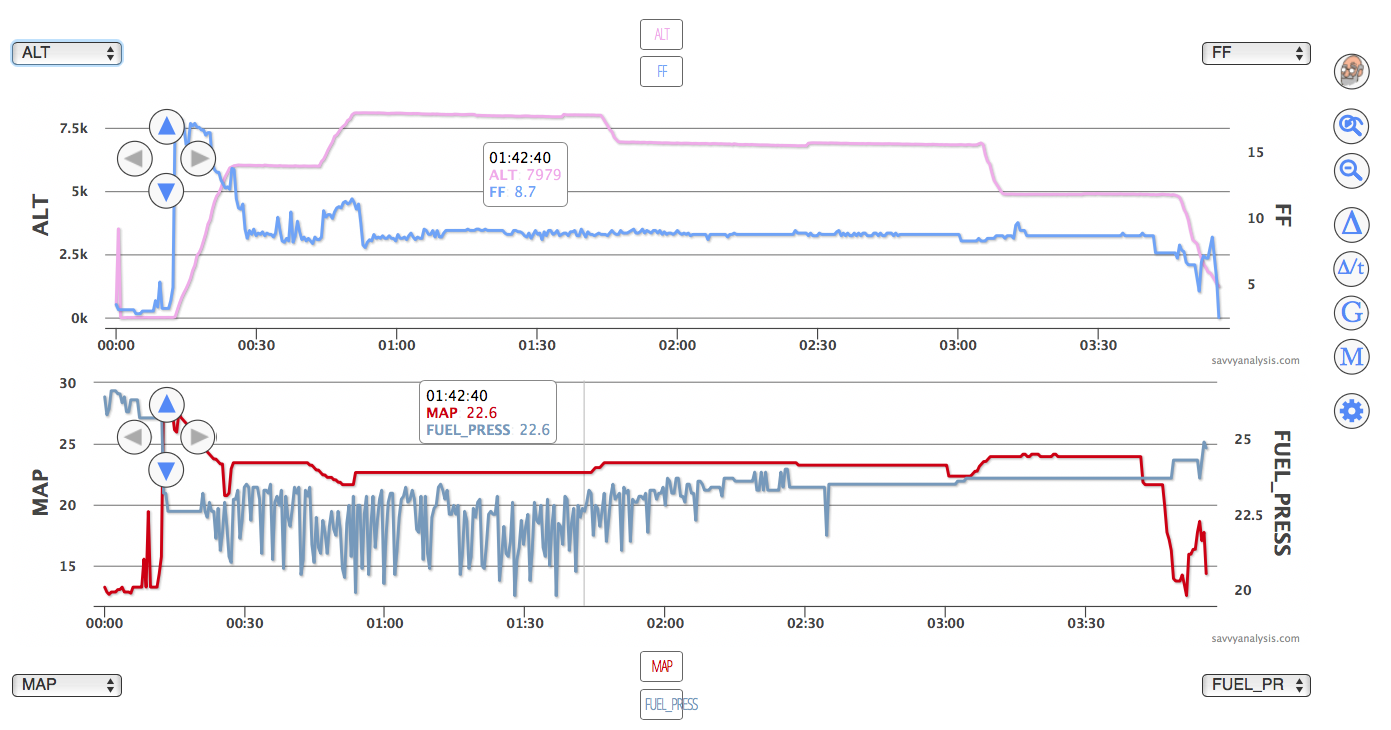 Our client reported a fuel flow fluctuation and because it’s a Mooney it was assigned to Savvy analyst Paul Kortopates, who owns and maintains a beautiful M20K. Because Paul works a lot with turbos, he has good radar for vapor lock, and once he set up a graph with this information it was easy to spot the correlation between fuel pressure, fuel flow and altitude. Next question was what to do about it.

The Mooney owner had replaced fuel hoses four years earlier but remembered that the fittings weren’t firesleeved and were close enough to the cyl 4 exhaust header to respond to heat in that area. A little bit of firesleeve was all it took to stabilize fuel pressure. 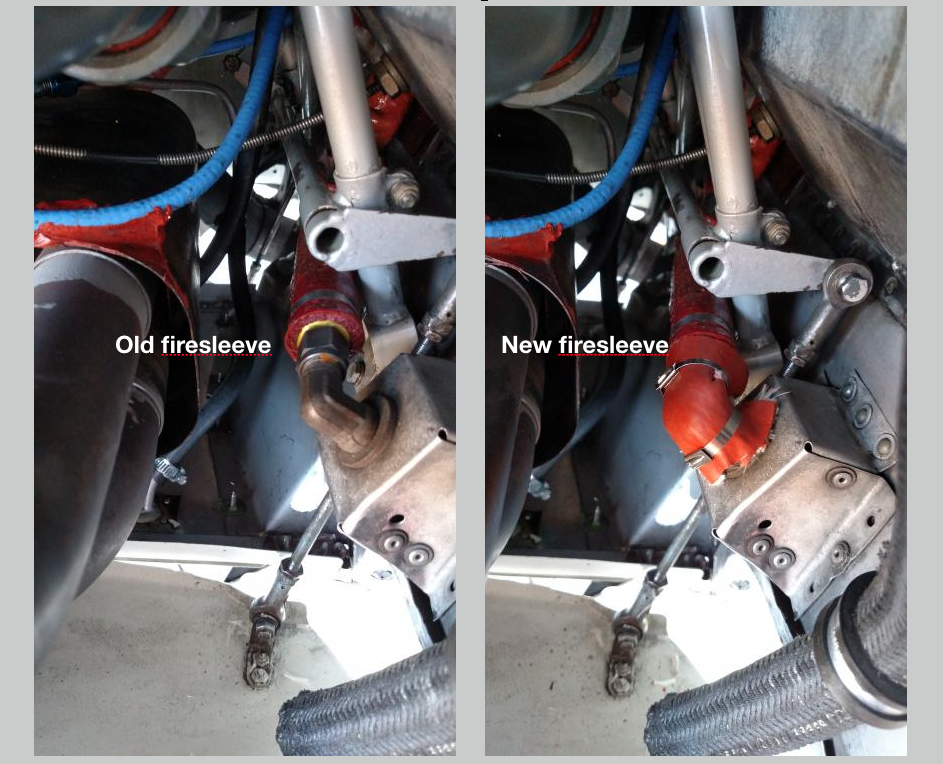 Let’s finish this month with data from a Piper Archer 181 with a Lycoming O-360 engine and data from an EI CGR-30P with a 1 sec sample rate. This time I used 3 graphs – EGTs on top, CHTs below that and, because MAP is not logged, RPMs as a proxy for power. 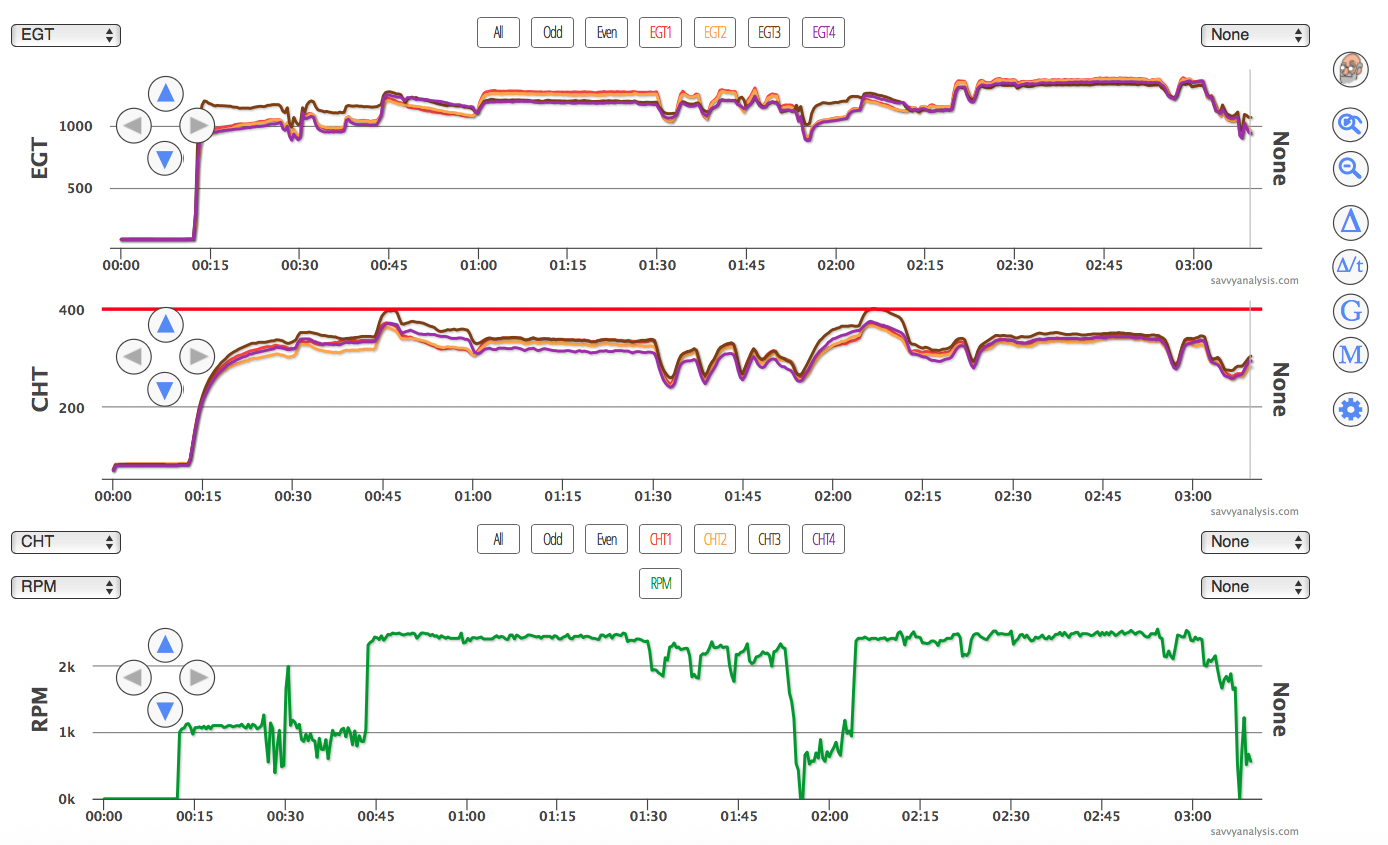 Carbureted engines come with their own set of conjectures. This analysis request began with CHT 3 being high at takeoff. True, and EGT 3 is highest at takeoff, and both were highest on taxi-out when the difference between ambient manifold pressure and engine manifold pressure is greatest, and both do that again in the takeoff around the 2 hr mark.

If this were a cooling issue, we wouldn’t necessarily expect EGT 3 to climb when CHT 3 climbs. If this were weak spark, EGT 3 should be high but we wouldn’t expect CHT 3 to jump, too. This looks like cyl 3 is running lean, and since we don’t have an injector to clean, we have to suspect an induction leak. Another clue is that in the climb, from about 45 mins to the 1 hr mark, EGTs 3 and 4 are highest, then when the pilot leans for cruise, EGTs 3 and 4 drop below 1 and 2. They’re already running lean in the climb and leaning for cruise just makes them leaner and reduces their power output. Here’s what an examination of the cyl 3 induction tube discovered. 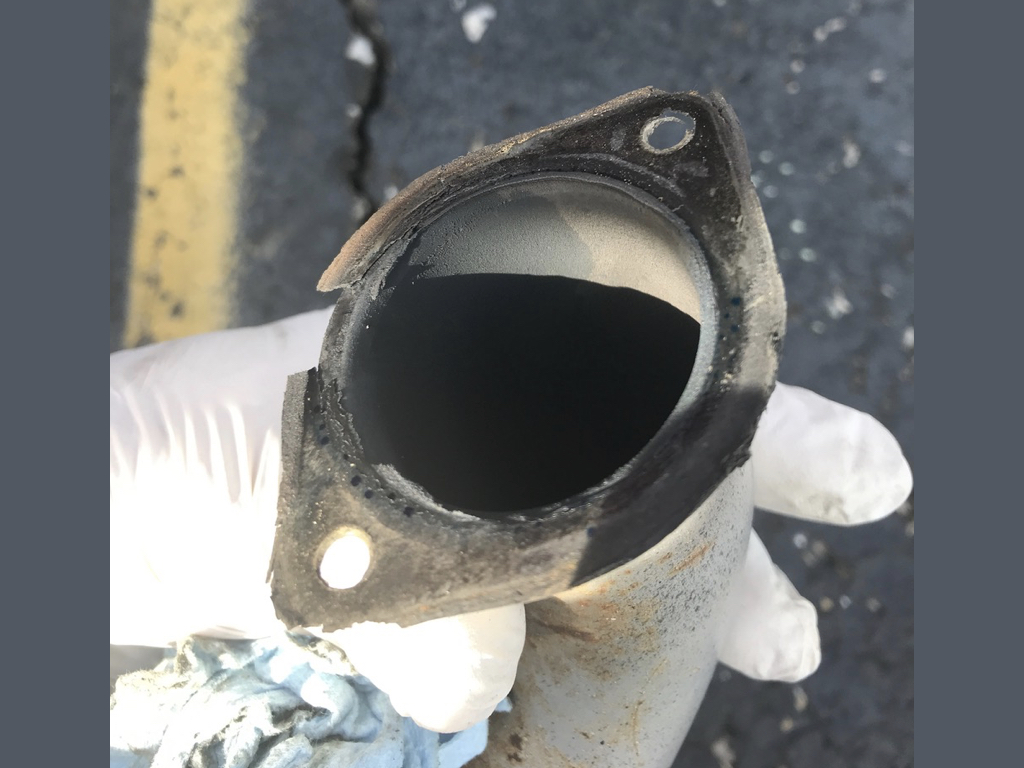 Next month the aforementioned Paul Kortopates will write the Puzzler, concentrating on issues we’ve seen with turbo-powered engines. I’ll see you again in January.