Corroboration – evidence that supports a proposition that already has some supporting evidence – is an important component of engine data analysis. Corroboration can come from other data, or from the pilot who submits the analysis request. In analyzing the data, it helps us to have comments like “I thought the engine would shake itself right off the mounts” or “I heard a popping sound on the R mag but not on the L” or “Just after setting cruise power I noticed a surge in RPMs that lasted for about a minute, then never happened again” or “It was just as smooth on one mag as on both.” It also helps if you notice and report that a legacy gauge – CHT, fuel flow, manifold pressure, whatever it is – corroborates or disputes the data from the digital engine monitor. When probes go rogue and give us wacky readings, it helps to know that the steam-powered gauge didn’t flinch and showed a normal reading consistent with normal engine performance. Let’s look at some examples of recent data submitted for analysis.

Here’s data from a Cirrus SR22 with a Continental IO-550-N and GAMIjectors. This is the one that arrived with the “right off the mounts” comment. 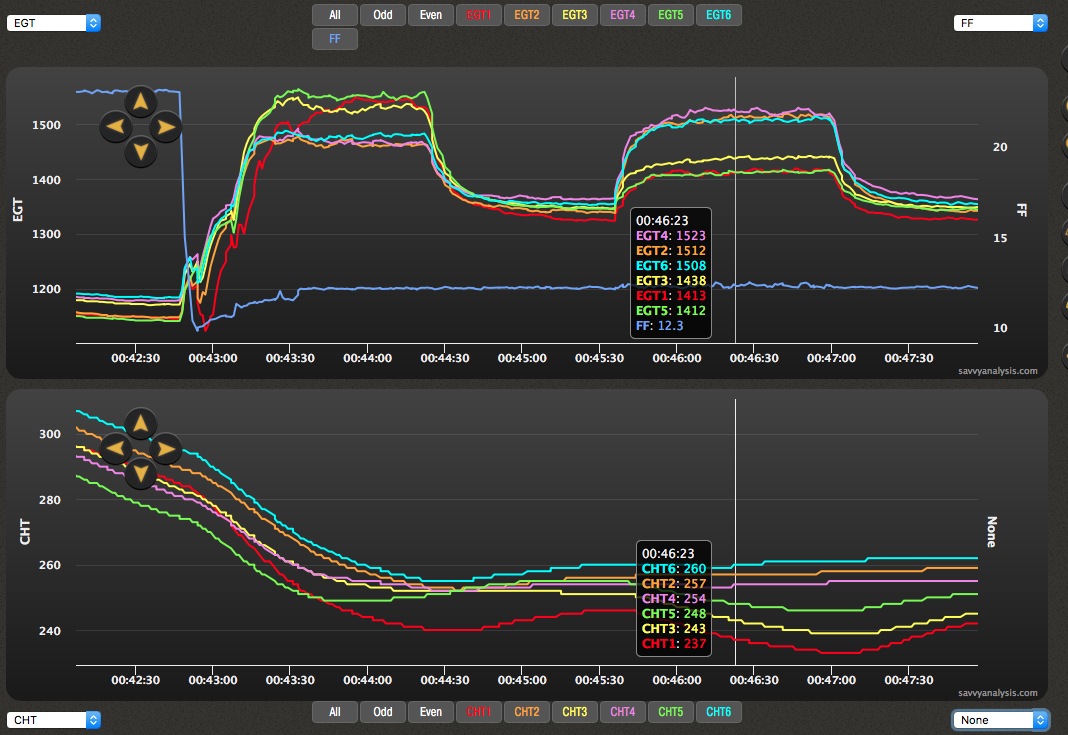 Rather than use our M tool to display odd EGTs on top and even EGTs on bottom, I included CHTs in the screenshot so we can look at them for corroboration. On this engine, the L mag fires the top plugs of 2-4-6 and the bottom plugs of 1-3-5. If the L mag was isolated first, then we should expect higher EGTs from 1-3-5, and that’s what we see. The red trace of EGT 1 starts out wobbly and eventually settles as FF settles, but there’s a good half-minute there that was probably pretty rough. CHT 1 corroborates weak combustion on the L mag, and lower CHT and wobbly EGT suggest the top plug fired by the R mag is worth checking as well. We’d also recommend looking at the bottom plugs of cyl 3 and cyl 4.

Here’s data from another Cirrus SR22 with a Continental IO-550-N and GAMIjectors. This one arrived with a comment about using the second mag check – not the first. 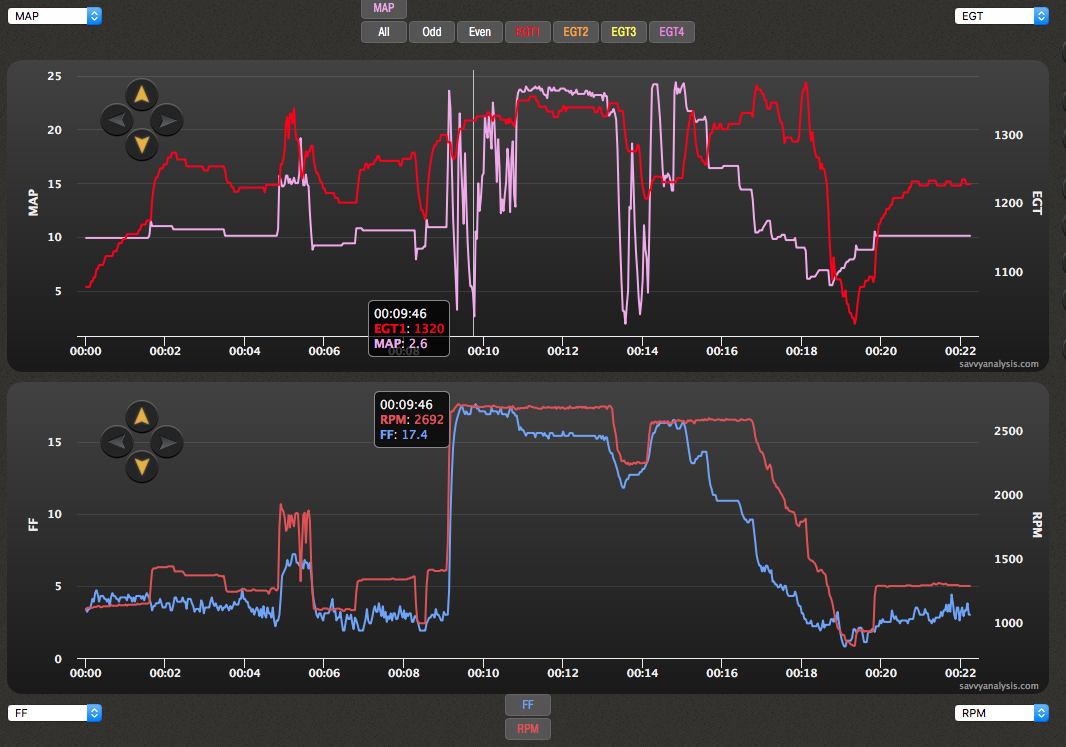 EGTs 1-3-5 are on top, along with fuel flow, and EGTs 2-4-6 are on bottom. Where’s some corroboration? The fine grey horizontal line at the lowest point of the mixture sweeps is about 9.2 GPH, and the cylinders were making power with both mags firing. Same FF, down to one mag, and 1 and 5 flame out.

I included the mixture sweeps in the screenshot so you can see that cylinders peak at about the same fuel flow – the spread averaged to 0.3 GPH, which pretty much rules out clogged injectors. So when fuel flow dips to about 9 GPH at the cursor, and the red EGT 1 trace and the green EGT 5 trace drop, it suggests weak spark, not a mixture distribution issue.

Our Lean of Peak mag check does a good job of identifying weak spark provided that the mixture is lean enough to unmask weak combustion – without inducing weak combustion.

Here’s data from a Cessna 177 Cardinal with a Lycoming O-360. MAP and EGT 1 are on top, FF and RPM on bottom. I hid the other three EGTs to reduce screen clutter. 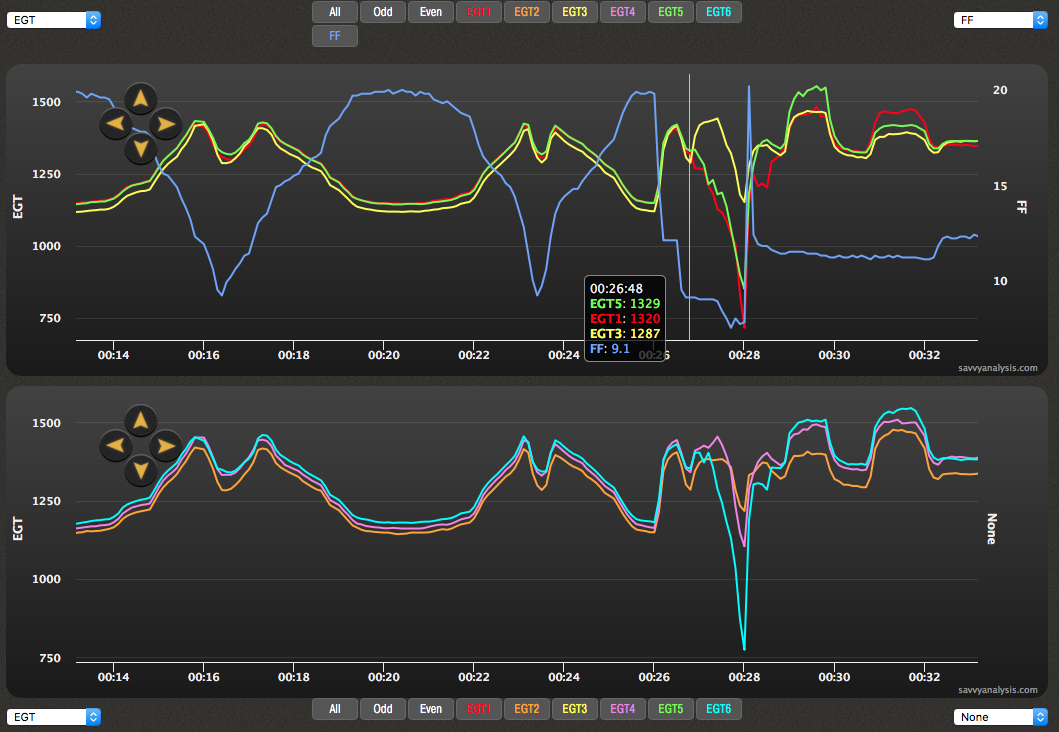 At the cursor, seconds after takeoff, EGT, FF and RPM indicate the engine is making power. MAP, on the other hand, shows 2.6″ at the bottom of a series of spikes from the 24″ range. None of the other parameters are corroborating unusual combustion. The pilot noticed the erratic MAP readings during climb, but the engine ran normally. At pattern altitude he changed power and MAP stopped spiking and evened out. Just before the 13 min mark he was sufficiently rattled by the weirdness and decided to reduce power and get back on the ground.

They make those little suction cups so you can cover a failed gyro instrument and stop fixating on it. We don’t have those for failed or loose data probes yet, but even if we could digitally ignore the data and continue to fly, it’s hard to second-guess a pilot who opts for sorting things out on terra firma. This MAP sensor could just be a loose connection – it’s ok until full power is applied which is presumably the high-point of vibrations.

Next up is data from another Cirrus SR22 with a Continental IO-550-N. 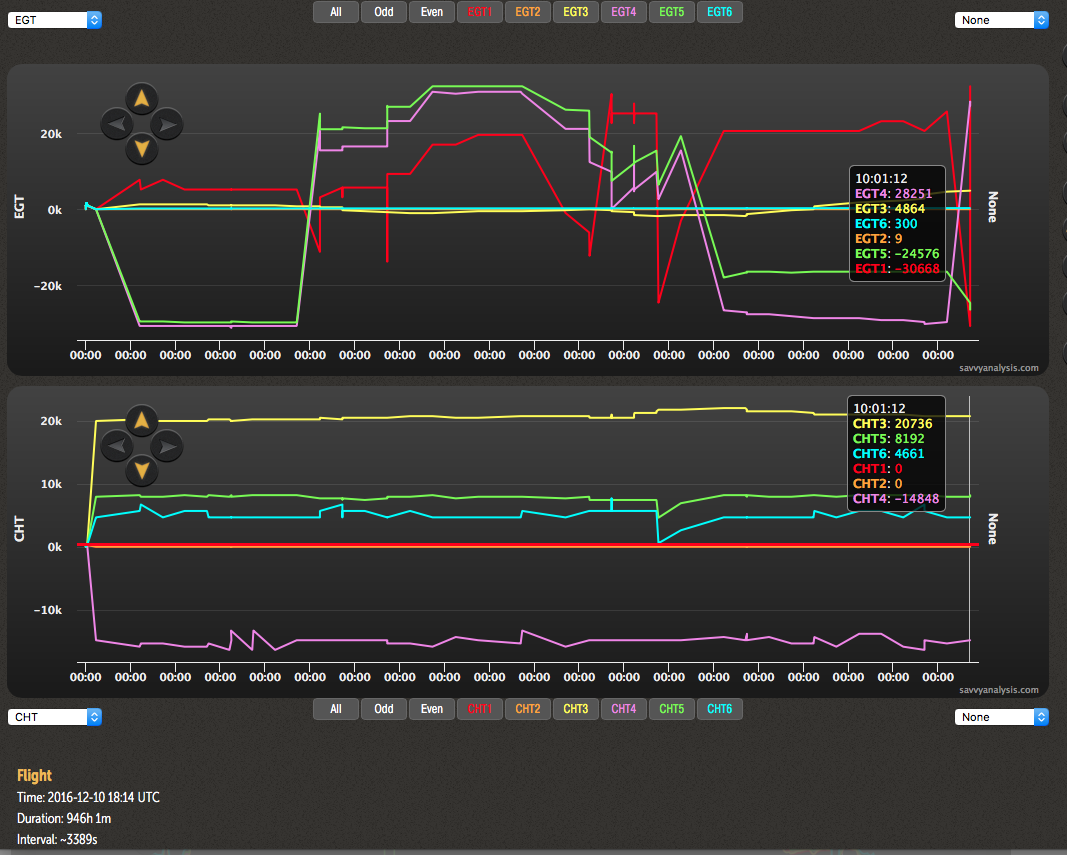 I included the flight time and the data sample rate in the lower left hand corner. 946 hours is about 39 days. For comparison, Burt Rutan’s Voyager, flown by his brother Dick and Jeana Yeager, was airborne for about 9 days during their non-stop flight around the world. Our timeline is so confused it just shows zeros. The sample rate is every 56 hours – but it’s the EGTs and CHTs that really defy science.

The corroboration, more precisely the lack of it, in this case is the pilot reporting a normal flight of about two hours, including mixture sweeps and a mag check. The pilot did report powering up the avionics bus, then briefly turning it off, then on again. That seems to have confused the Avidyne into giving us this mishmosh.

Sometimes we can massage a file that doesn’t upload properly and remove the bad data and save it. On this one, the parser didn’t reject the data, but we know it’s bogus. Nothing to do here except fly the test profile again.

Let’s finish 2016 with some good news, although the data sure didn’t look like it was going to be the bearer of good news when it arrived. This is Cirrus SR22 with a Continental IO-550-TN. 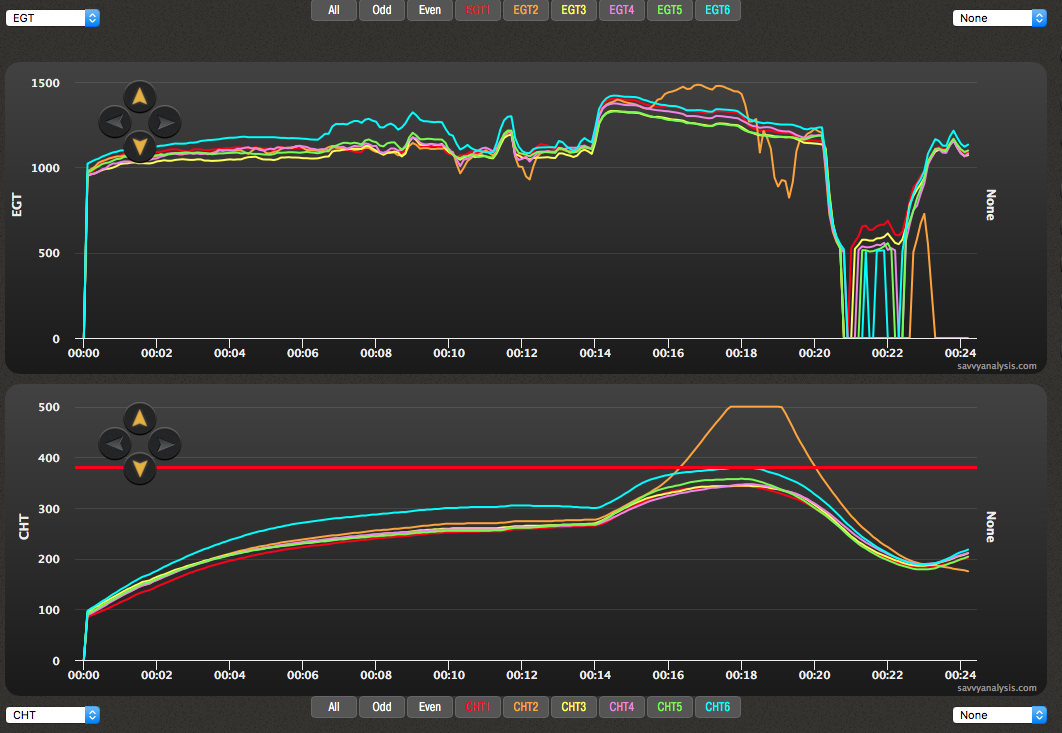 This is a pre-ignition event in cyl 2 caused by a cracked spark plug insulator. Subsequent borescope examination of the cylinder revealed no damage to the piston, barrel or valves. Notice that the CHT flatlines at 500 deg. That’s the limit of the probe and the Avidyne. Who knows how hot it really got in there? The CHT excursion begins just before the 18 min mark, and power is reduced just after the 18 min mark, so it looks like quick action by the pilot saved the cylinder – maybe the engine.

Was there a clue that this was going to happen? There are two small blips in EGT 2 during ground ops, at around 10 and 12 mins, but neither looks like a signal of incipient failure.

See you next year with more Puzzling engine data.