The Farmer’s Almanac says that the phrase Dog Days wasn’t originally about canines panting in the heat, it was about the appearance of Sirius the Dog Star and its reminder to ancient Egyptians about the annual flooding of the Nile. I like the dog days because a clear night sky gives you good views of Mars, Saturn, Jupiter, and if you stay up late enough you get a meteor shower for an encore. Ok, but it’s going to take a literary Lomcovák to connect this astronomical musing to engine data analysis, and here it comes.

Only the most astute of the ancient Egyptians would have noticed or remembered that Sirius was in the sky the last time the Nile flooded, too. And the time before that. It takes a while for a pattern to emerge and be recognized, and then you want evidence to support it or refute it. In previous Puzzlers we’ve seen examples of clogged injectors, weak and non-firing spark plugs, sticky valves, failed probes and other common patterns. Here’s one we haven’t seen in a while.

This flight is from a Cirrus SR22 with a Continental IO-550-N and data from an Avidyne with a 6 sec sample rate, using my preferred layout of EGT on top, with CHT, FF and Oil Temp below. 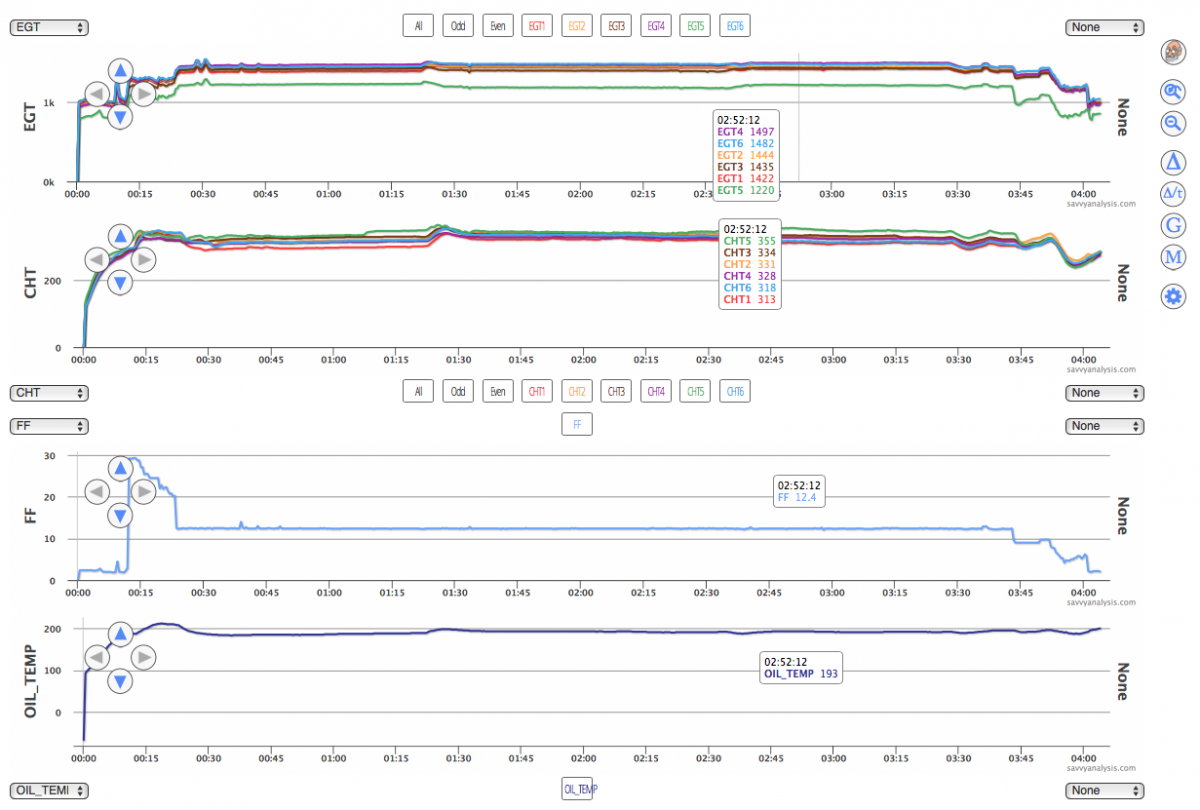 Looking for clues, the obvious one is that EGT 5 – the green trace – is low throughout. CHT 5 is sometimes higher than the others, sometimes not. CHT 1 is low initially, then normal. There’s a slight change in overall EGT, CHT and Oil Temp – but not FF – from about 1 hr 25 to about 2 hrs 40. That’s a climb from 9000 to 11000 and back down again. There’s a mag check just before the 30 min mark, suggesting the pilot noticed the low EGT 5 and was investigating. The remarks that accompanied the analysis request stated that the engine ran fine but there was a popping sound when power was reduced during approach.

We already knew – and common sense tells us – that a crack in an exhaust riser should cause a lower EGT, because some of the hot gases are escaping through the crack, and the gases that stay in the pipe and pass over the probe are diluted with cool non-exhaust air. The variations on the pattern will be from the size of the crack, where on the pipe the crack is located, and which cylinder it’s on. A crack in the middle of the riser could aim gas in the direction of the CHT probe and cause it to read high. We’ve seen everything from no rise or a very small rise to a full-on blowtorch effect.

Knowing that this aircraft was a 2005, when we added it all up, it looked like the flooding of the Nile. We’ve seen SR22s from the 2003-2005 era develop this type of crack in the cyl 5 exhaust riser, up near the flange. If the crack isn’t discovered early, it’ll crack all around the pipe. The image below is the crack on the left, the repair on the right. 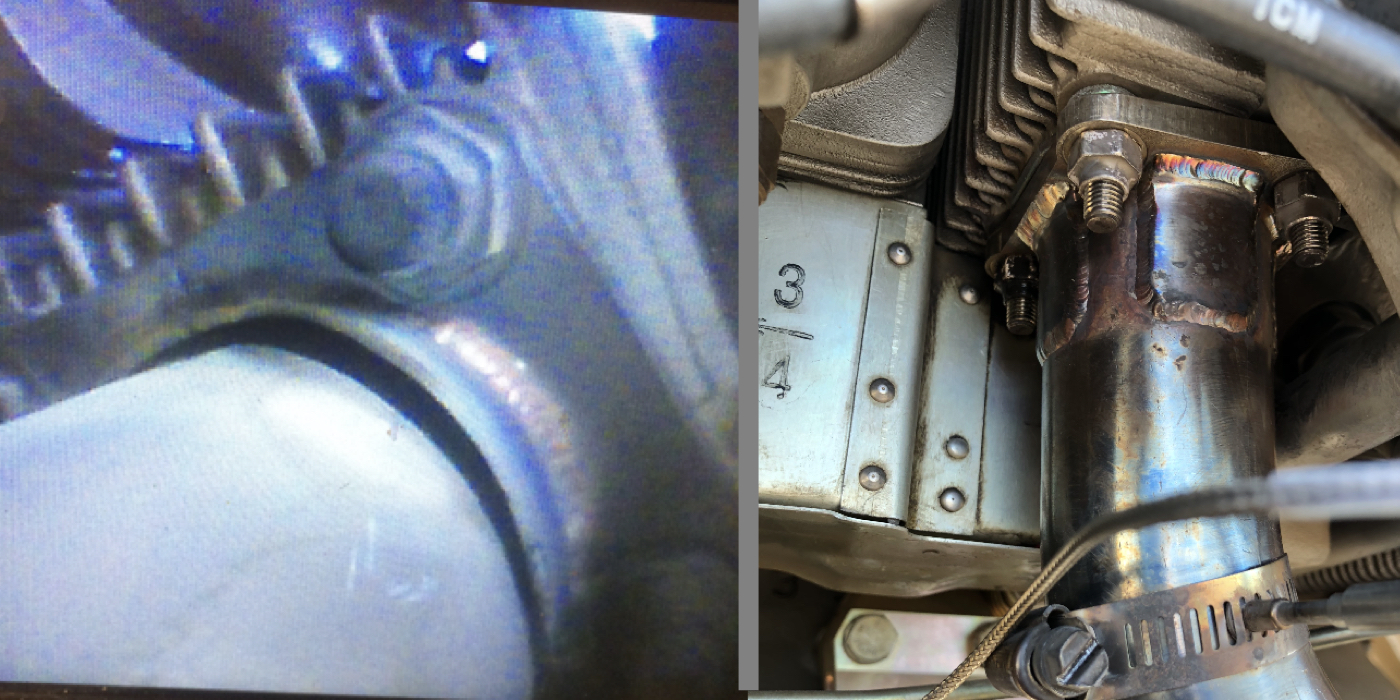 Next up is data from another Cirrus SR22, this one with a Tornado Alley IO-550-TN and data from an Avidyne with a 6 sec sample rate. This time MAP is displayed with FF and Oil Pressure along with Oil Temp. 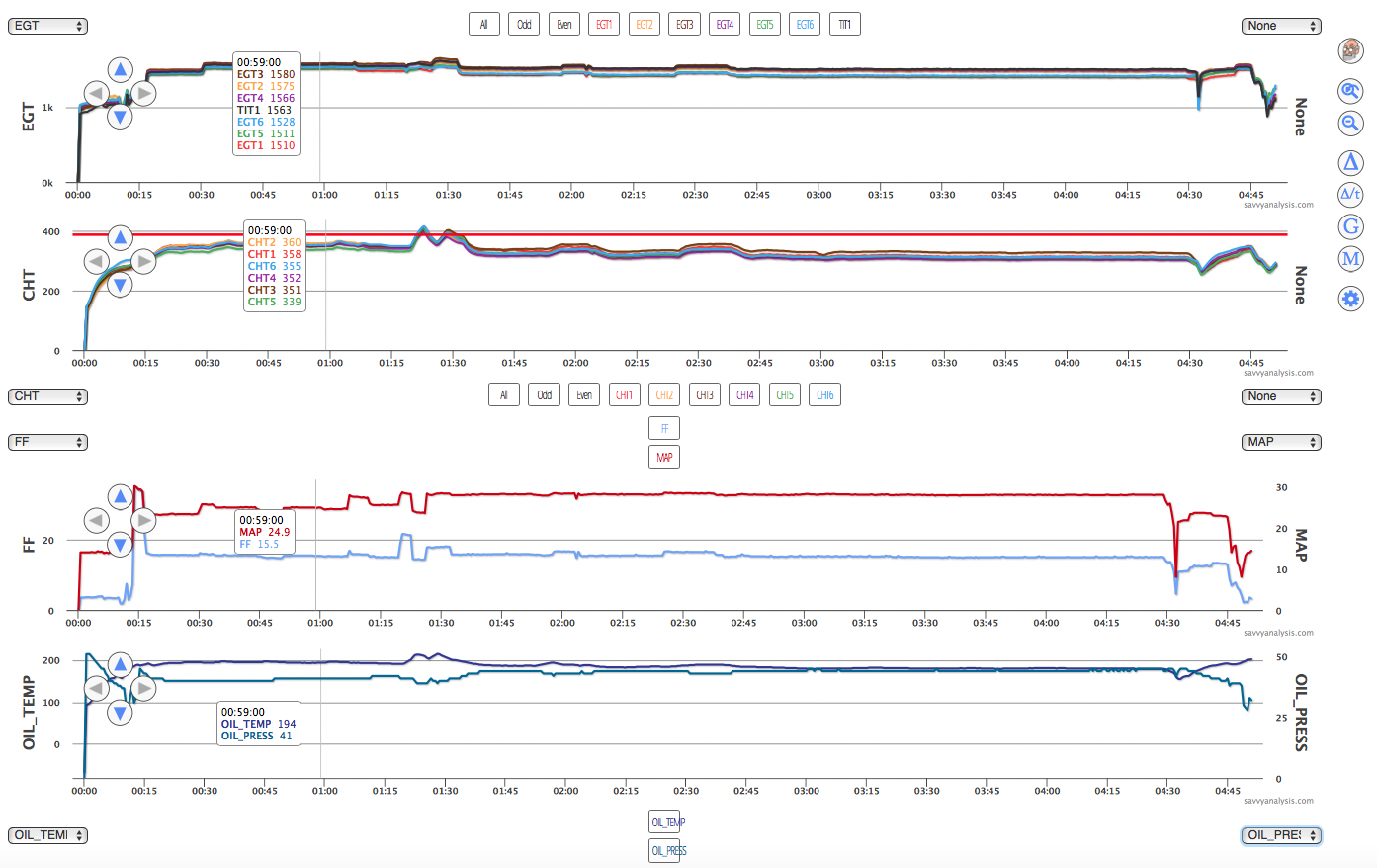 The report was that the engine was having trouble maintaining power in climb. MAP was dropping 0.7″ per thousand feet, so it was performing only slightly better than a normally aspirated engine. The shop suspected it was a waste gate oscillation due to a  stuck waste gate or a plugged wastegate capillary tube. Sometimes a shot of Mouse Milk will do the trick on a sticky wastegate, but this time it didn’t fix the problem. Exhaust was ok, induction was ok, they did find a crack in the support hanger for the right side turbo, but that wasn’t causing the power loss.

At that point a keen-eyed mechanic noticed that the oil lines had been changed as part of a previous service about nine months ago – not so recent that it would be top of mind, and it was a different shop. The fitting closest to the oil cooler is supposed to have a restricted meter orifice, which is a Tornado Alley part, not a AN part. Inspection revealed that two of the fittings were AN parts, which meant that without the proper restricted orifice in the H-fitting, oil pressure would never get high enough to actuate the Absolute Pressure Controller to control the wastegate properly. 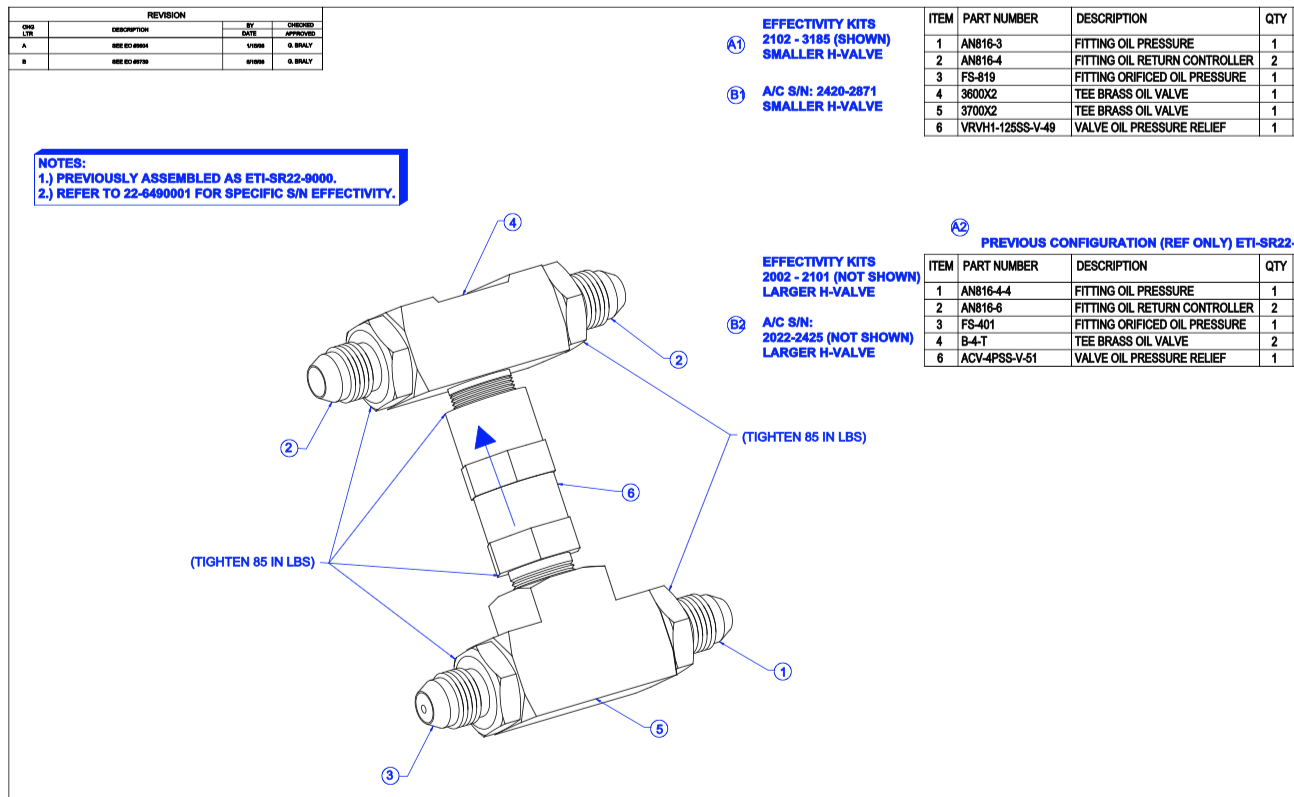 Once the proper fittings were installed, the engine performed normally again. So far this is an event, not a pattern, but if some future scenario shows low MAP along with low oil pressure, and the logbooks show that oil lines were changed recently, we’ll know where to look next.

Next up is data from a Mooney M20K with a Continental TSIO-360 and data from a JPI with a 1 sec sample rate. Standard layout, but the TIT trace is bold. Nothing unusual happened up to now so we start about halfway through a 4 hr flight. 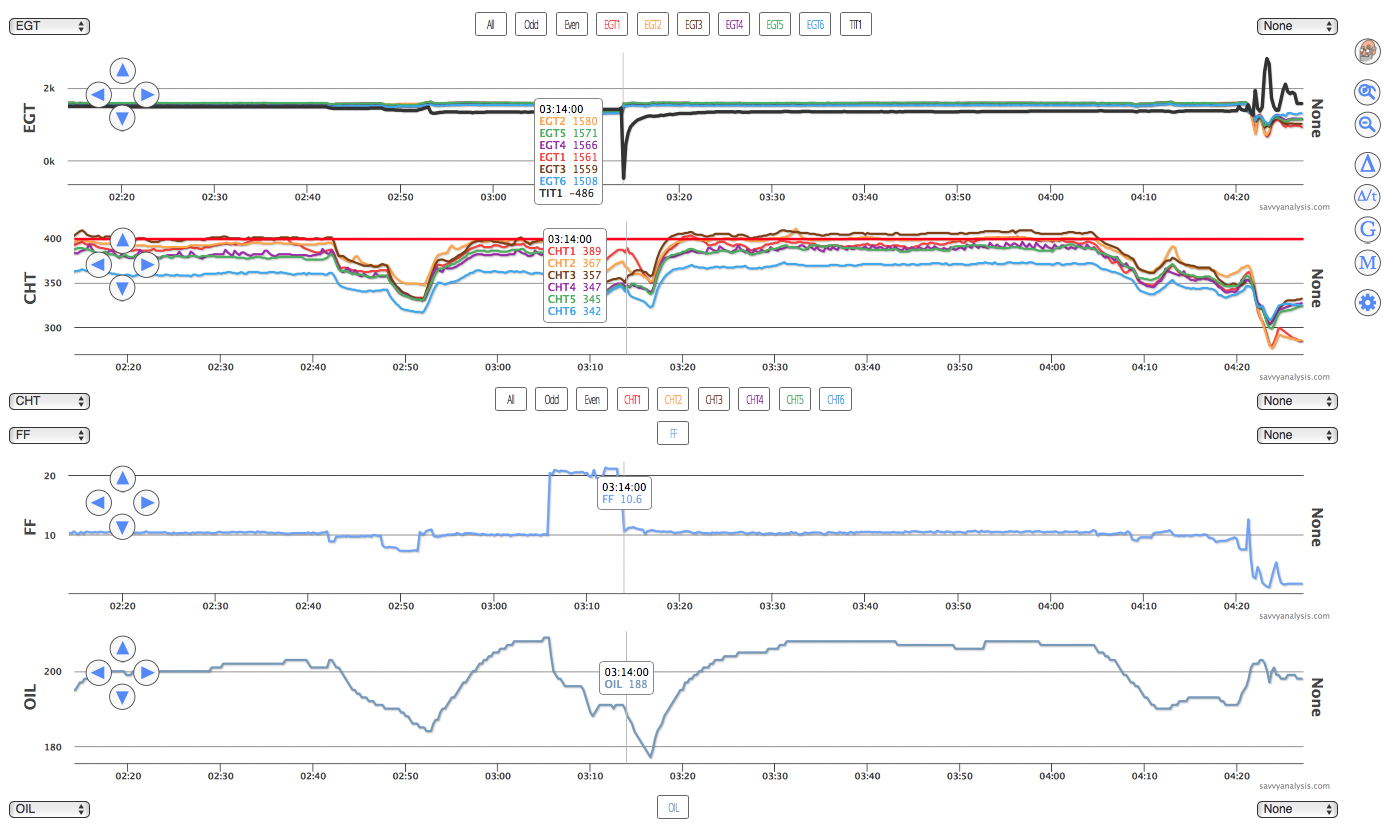 TIT is pretty steady until power changes, then it spikes – first to -486º then later to +2800º. Can we call it a pattern to show normal tracking until it has to display something new, and then go bonkers? Probably, but since probe failure is a fact of digital engine monitor life, let’s hope the pattern is that your probes announce their failure so irrationally. Here’s what the little fellow looked like upon retirement. 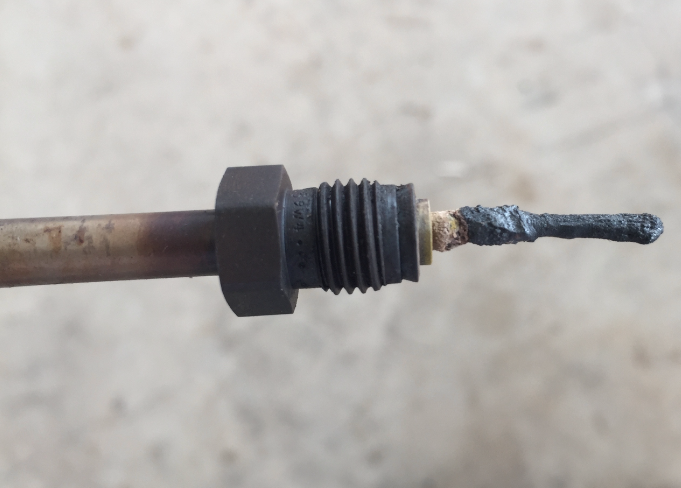 Let’s finish with a flight from a Maule M-7 Rocket with a carbureted Lycoming O-540 and data from an EI CGR-30P with a 1 sec sample rate. Standard layout except OAT in Cº is included with Oil Temp. 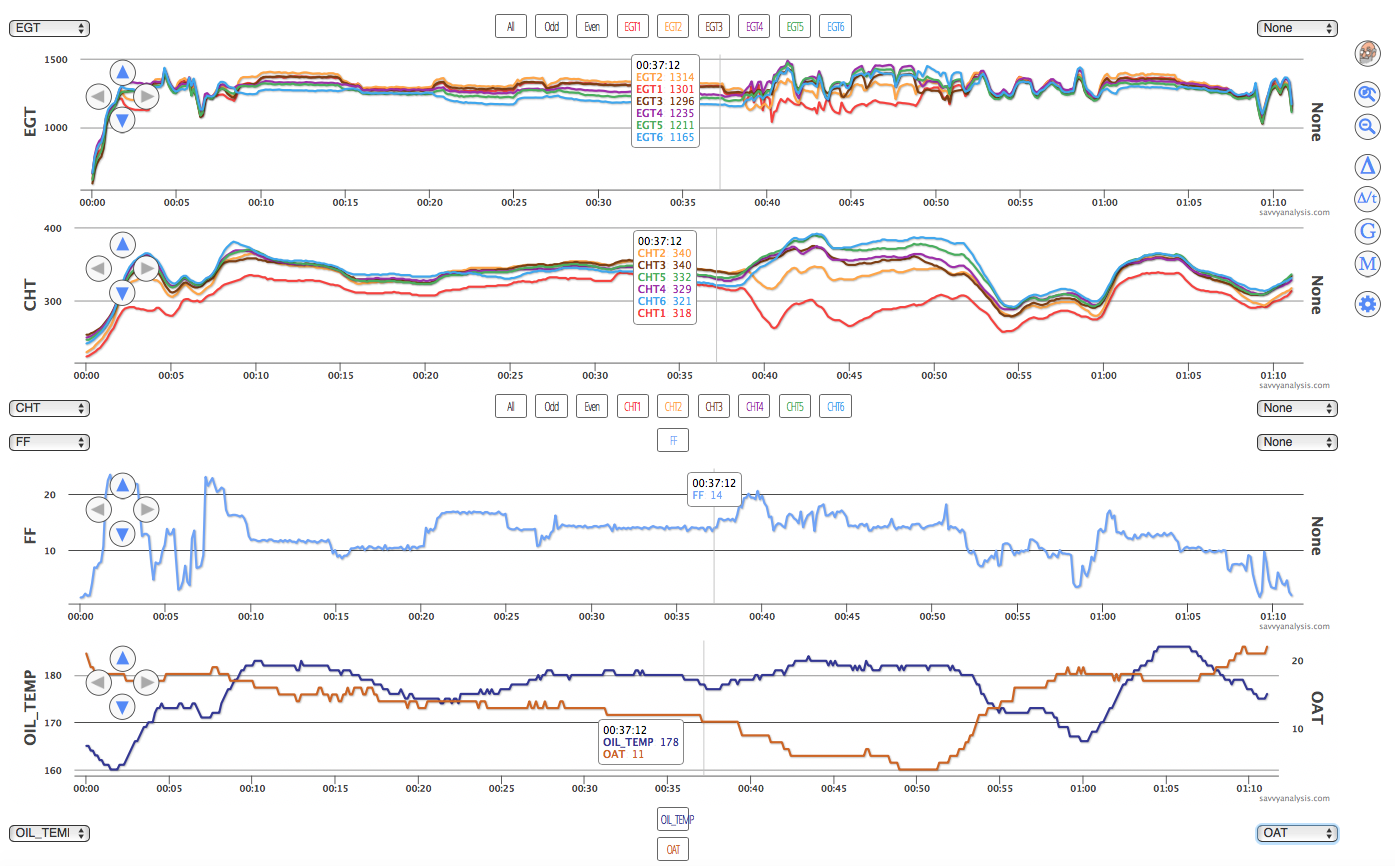 Things look pretty good up to the cursor, then it’s a rough ride. You’re probably thinking OAT is important since I included it. Let’s go a step further and change OAT to Carb Temp in Fº. 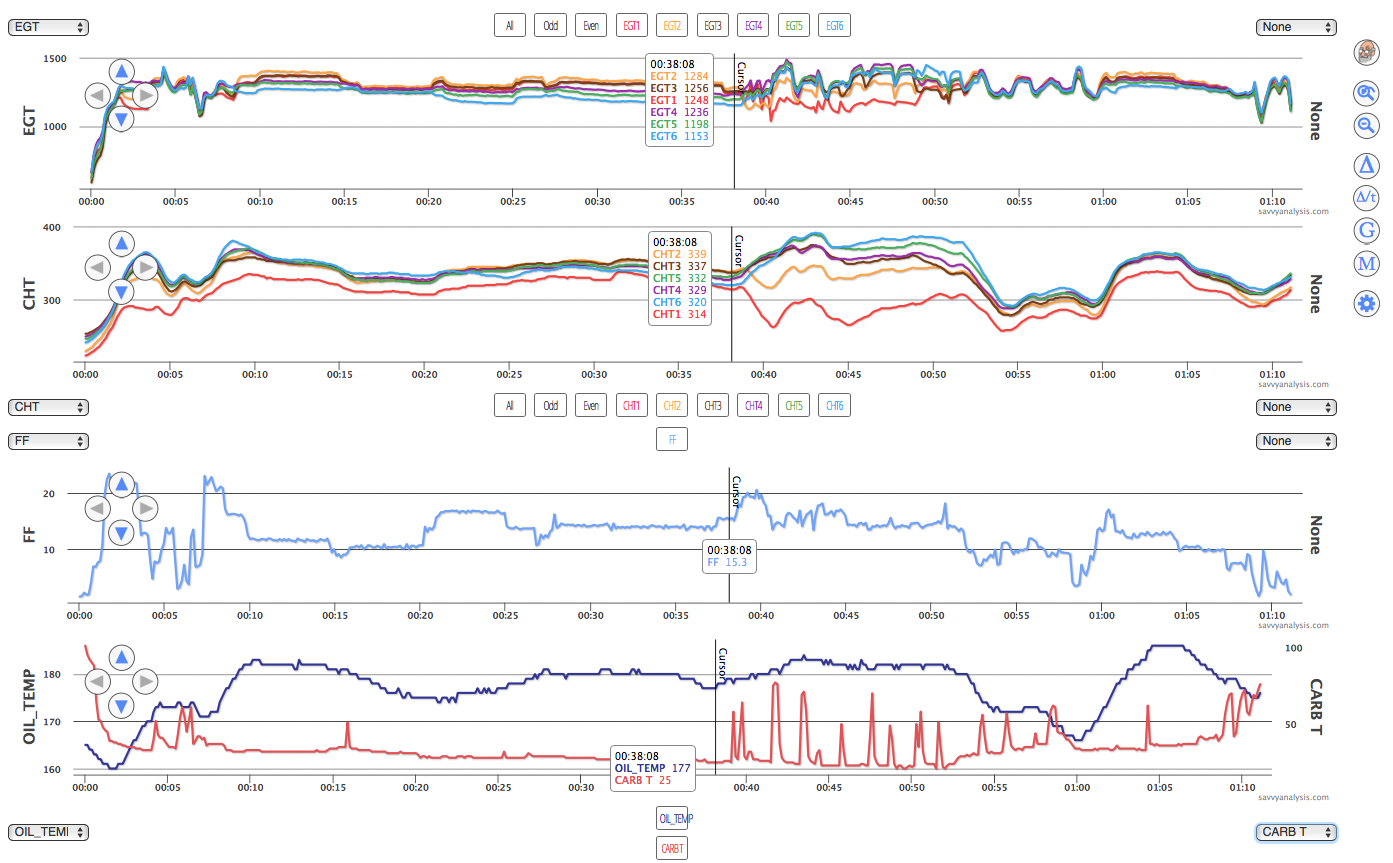 OAT is 52º F but carb temp is 25º F, plenty cool enough for moisture to crystalize. Continental owners who are used to cylinders 1 and 2 being aft should remember that on Lycomings 1 and 2 are in the front. Being in front is great for cooling on hot days, but this wasn’t a hot day. Judicious and repeated application of carb heat – the spikes in carb temp are about 75-80º F – eventually result in the engine running smoothly again.

Carb ice seems to be one of those things that you know you had it because the steps you take to get rid of it made it go away. Hopefully thinking about the nice cool innards of a carburetor will help you through the last sweltering dog days of August.