One of the most famous and inspirational sayings in aviation and aerospace is “failure is not an option.” If you like the Ron Howard movie Apollo 13, chances are you’d like the book – or the Audible version – about the American space program from the point of view of Mission Controller Gene Kranz. Despite the saying, we know that there are failures for owner-flown piston aircraft airplanes. We know that mechanical parts do fail, and we know that some failures are maintenance-induced. When they happen, we need to be able to recognize them, and hope we don’t need a roomful of brilliant and resourceful engineers to get us safely back to Earth.

Let’s start 2018 with a scenario that was easy to solve, and would have been just as easy to keep from happening in the first place. Data is from a Piper Turbo Arrow III with a Continental TSIO-360 engine and data from a JPI 830 with a 2 sec sample rate. Some history — mixture sweeps showed a consistent GAMI spread of 0.9 – 1.1 GPH. That’s higher than we like to see for running 50º LOP in cruise. So the owner decided to install a set of GAMIjectors. Post-installation mixture spreads were in the 0.4 – 0.5 range so all was well, until the annual.

With a spread that good, Savvy would be inclined to leave the injectors in place and not pull them for cleaning – even if they weren’t newly installed. But the decision was made to clean them, and after the annual, the engine would not fly smoothly when leaned for cruise. Here’s data from the 20 min to the 38 min mark, starting just after climb and just before leaning for cruise. EGTs on top, with fuel flow overlaid in blue, and CHTs on bottom. You can see the pilot leaning, getting an unexpected result, and richening again before coming back to land. 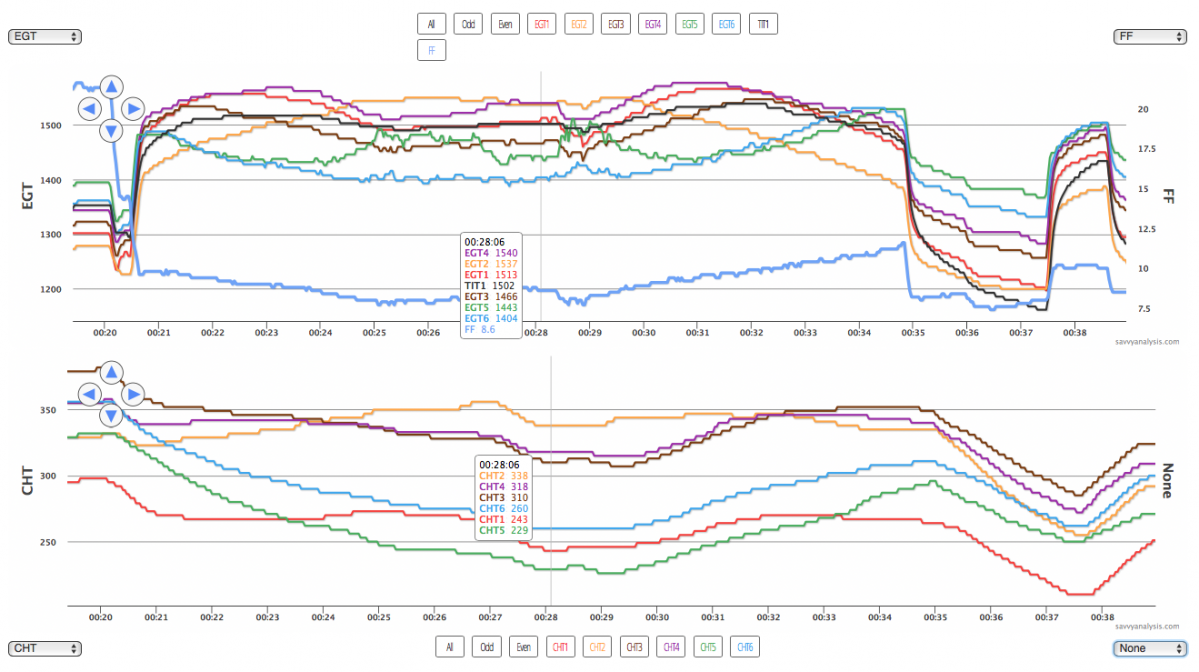 GAMIjectors come with a little metal plate that gets epoxied to the valve cover, and there’s a number on each plate and each injector. It’s easy to match them up so the injectors go in the correct cylinders, unless you’re not paying attention, and that’s what happened here. Once the injectors were removed and properly re-installed, the mixture spread went back below 0.5 GPH and the engine was able to run LOP in cruise again. If you ever wondered what can happen if your position-tuned injectors – whoever made them – wound up in the wrong holes, this is what can happen. I didn’t include the data from the climb because oddly enough the EGT and CHT spread was not so dramatic at max fuel flow.

Next is data from a Cirrus SR22 with a Tornado Alley mod on a Continental IO-550-N and data from an Avidyne with a 6 sec sample rate. EGT and FF on top, CHTs and RPM on bottom.

Things look pretty good during taxi-out and takeoff, and until just after the 30 min mark, then EGT and CHT 3 – the brown traces – both drop, corroborating one another. Fuel Flow drops there, too, but was not pilot-commanded. It looks like cylinder 3 just stops making power, but why would that cause fuel flow to drop so much? One important clue is that cylinder 3 had recently been pulled, overhauled, and re-installed.

The maintenance step after making sure the injector goes into the correct hole is making sure the brass nut on the fuel line gets tightened to spec. If you ever wondered what could happen when that nut gets loose, this is what could happen. The fuel line for cyl 3 worked loose, and began spraying fuel on the hot cylinder. With no back pressure from that fuel line, fuel pressure and fuel flow dropped for the other cylinders. It’s about 25 minutes from the event until shutdown, and it probably wasn’t obvious to the pilot from the data that a fuel line had detached, but that had to be a long ride. We don’t name names here but if this is your data, well done. Once the cowl was pulled it was obvious what had happened and once that was corrected, the engine ran normally again.

Next is data from the L engine of a Cessna 414 with a Continental TSIO-520-B and data from a JPI 760 with a 2 sec sample rate. This is EGT and TIT data for three recent flights – there’s nothing remarkable in the CHT or other data for this engine, or in the data for the R engine.

The scenario is that this engine was going through TIT probes at a pretty good clip. This one was the fourth in about two years. On the first flight the TIT trace – the black line – is a little erratic on approach. On the next flight it’s erratic in cruise and again on approach. On the next flight it just quits when the engine is leaned for cruise. It’s worth noting that it takes about 50-55 minutes on the first two flights for the probe to act up without recovering – it recovers on the middle flight – and that’s in the timeframe when it acts up on the 04:30 flight when it quits.

Either the shop that’s replacing these probes has a whole box of bad ones – unlikely – or something on the engine or maybe something in engine ops – is causing these probes to fail. The Savvy Mx account managers are pretty smart and a couple of them suggested an exhaust leak that was blowing on – torching – each new TIT probe. Data suggests the probes could take about an hour or torching before they acted up, and finally it got one torch too many. The exhaust leak was discovered and fixed, and now the engine is not burning up TIT probes anymore.

If you look verrrry closely at the EGT data on the last of these, you can see that one of the EGTs is not as stable as we like to see. So here’s that same data with TIT hidden.

When we see patterns in the EGT, we have to consider FEVA – the pattern we see when a burned valve turns in service. This data was scanned for FEVA – as is all data uploaded by Mx, QA and AnalysisPro clients – and did not trigger the alert. The pattern is not as repetitive as we usually see with FEVA.

Inspection revealed a bad connector on the harness for one of the plugs. The harness was replaced and the EGT was normal again.

We’ll finish the first Puzzler of 2018 with data from a Cessna Turbo 210 with a Continental TSIO-520 and data from an AuRACLE with a 2 sec sample rate. Here’s the first 54 minutes of the flight.

EGT 1 – the red trace – is low throughout, CHT 1 is ok at takeoff and climb, and just slightly higher than the pack in cruise. And then this happens.

The exhaust valve for cylinder 5 fails and sends EGT and CHT lower with corroborating engine roughness reported. Murphy – not missing his chance for a contribution – made sure this happened on a night flight on a dark night. This had to be a very long 12 minutes back to ground.

There’s no FEVA pattern in this data or in previous flights that would suggest exhaust valve 5 was headed for catastrophic failure. And it wasn’t just an edge or a sliver that broke off. 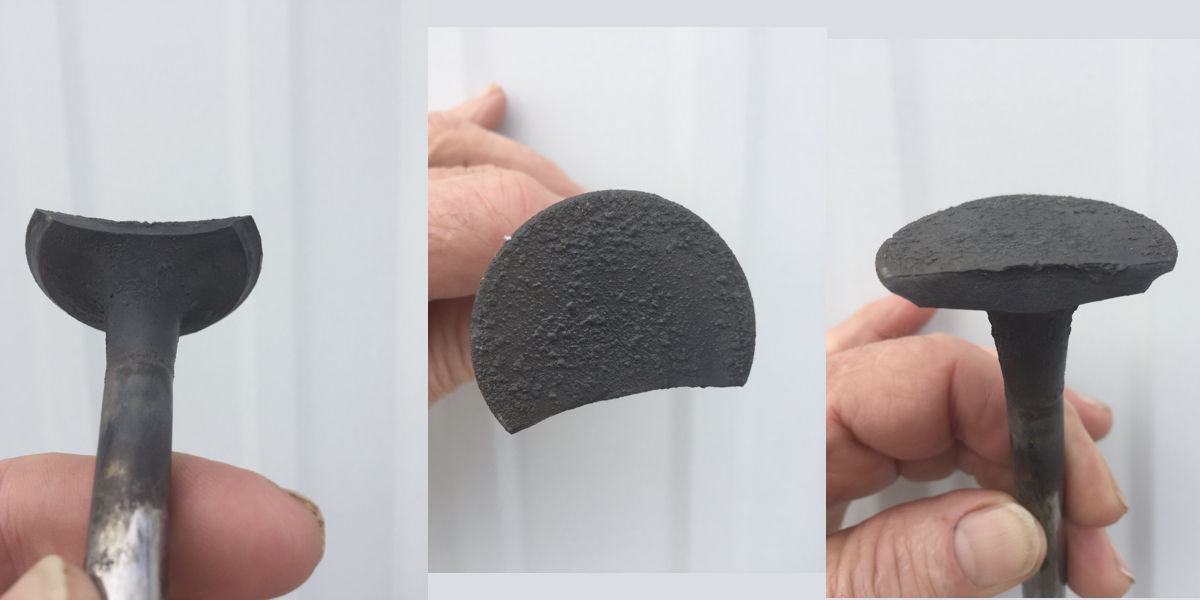 None of us would willingly randomize the position-tuned injectors on our engine or leave a fuel line loose just to see what the data would look like. Now that you’ve seen it, we hope it helps you make a more informed decision if you see something similar in your data.

When you’re working on a project it’s great to have the mindset that failure is not an option. If you’re trying to motivate people to do their best and overcome obstacles, it’s a great mantra. But we can’t ignore the fact that failures do happen, and being prepared to handle them is part of being a savvy owner and a skilled pilot.