There’s a running gag in my family when a mechanical device isn’t performing properly. It takes three people. After the owner of the device has described the symptoms in detail to the other two people, they offer suggestions about what’s causing the problem. Once all those suggestions have been met with “yeah, we tried that” or some variant, the suggesters make eye contact, nod knowingly and together they say “Flux Capacitor.” In other words, we’re out of ideas. I hope your family has funnier gags.

We’ll start this month with data from a Piper Turbo Saratoga with a Lycoming TIO-540 engine and a JPI 830 monitor with a 2 sec sample rate. EGT and Oil Pressure are on top – CHTs and MAP on bottom. 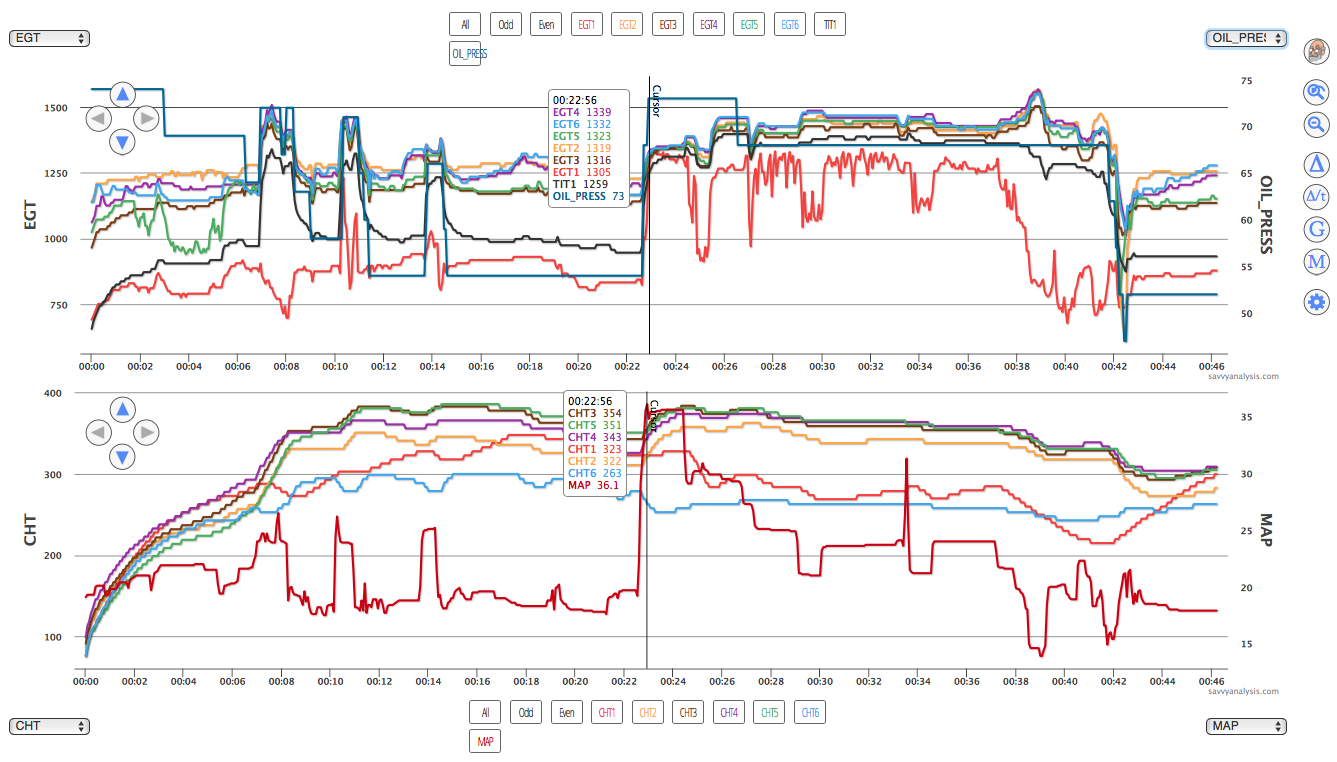 EGT 1 is the red trace on top and it’s clearly not performing well. MAP is the darker red trace on the bottom, but you can see that the other red trace – CHT 1 – corroborates reduced power output in cyl 1. CHT 6 – the blue trace – is a spark plug gasket probe, in case you were wondering why it’s so much lower than the others.

So what’s causing this? Let’s look at the usually suspects. Is it induction? MAP at startup is well above 15″ which is a little on the high side, but MAP gets lower later, and an induction leak should cause a leaner mixture resulting in higher EGT and CHT, and we’re not seeing that. An injector clog should also cause leaner mixture and higher EGT and CHT – not seeing that either. Ditto a clogged cyl 1 fuel line. The runup mag checks are inconclusive – they show drops and rises for each mag. Poor spark in one plug could cause the lower CHT, but should result in higher EGT and we’re not seeing that. A fuel or turbo issue should effect all cylinders, not just #1.

Is there a clue in the pretty close correlation of EGT 1 and MAP? At full power, the EGT looks almost normal, then gets lower and jumpier as MAP is reduced. We knew from client reports that the plugs and injectors had already been looked at. We went back several flights and found data that showed low power at idle, marginal power in climb, normal power in cruise, and marginal again when power was reduced. 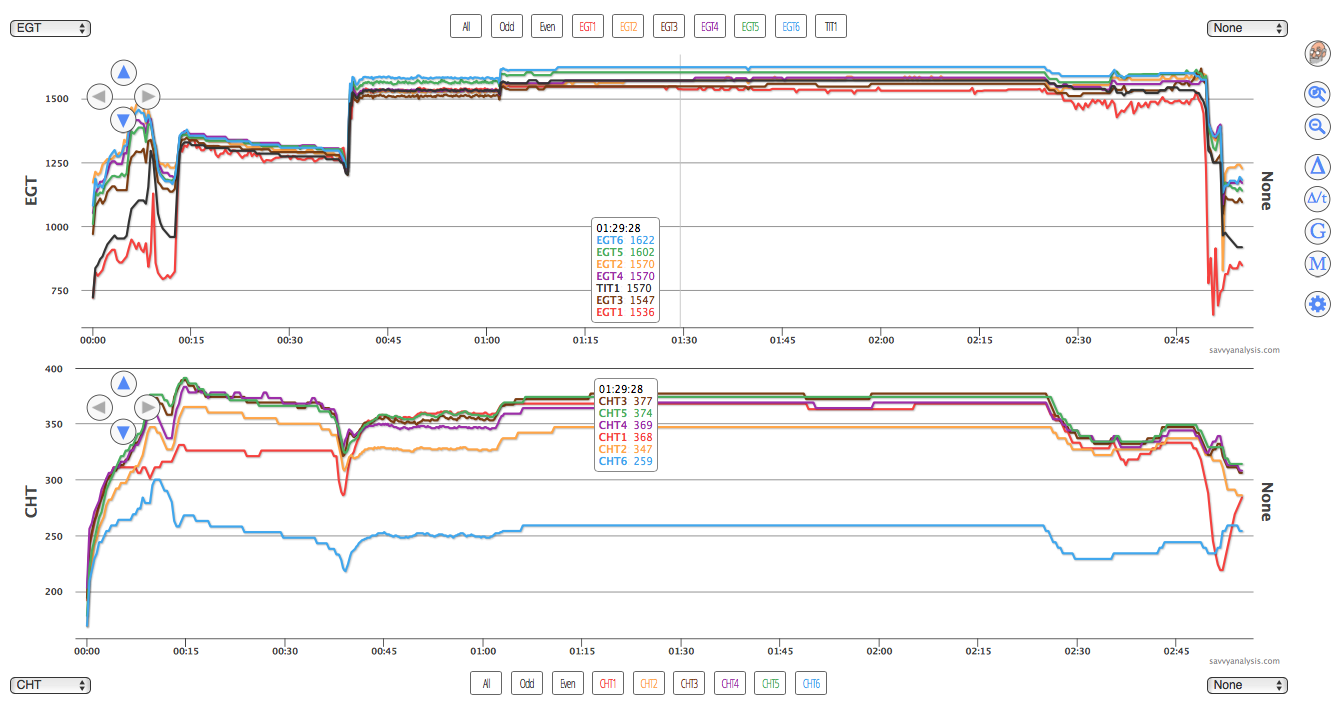 We’re not quite yet at the point with engine data where we can spot mechanical issues with certainty. We’re getting closer, and when the client reported that inspection had discovered a broken valve spring – it started to make sense. Got worse over time, less of an effect under power than idle, all the symptoms. It’s like one of those Escher paintings – once you see it you wonder how you didn’t always see it.

Here’s data from another Piper – an Aztec with a Lycoming IO-540 and an EI CGR 30P monitor with a 1 sec sample rate. 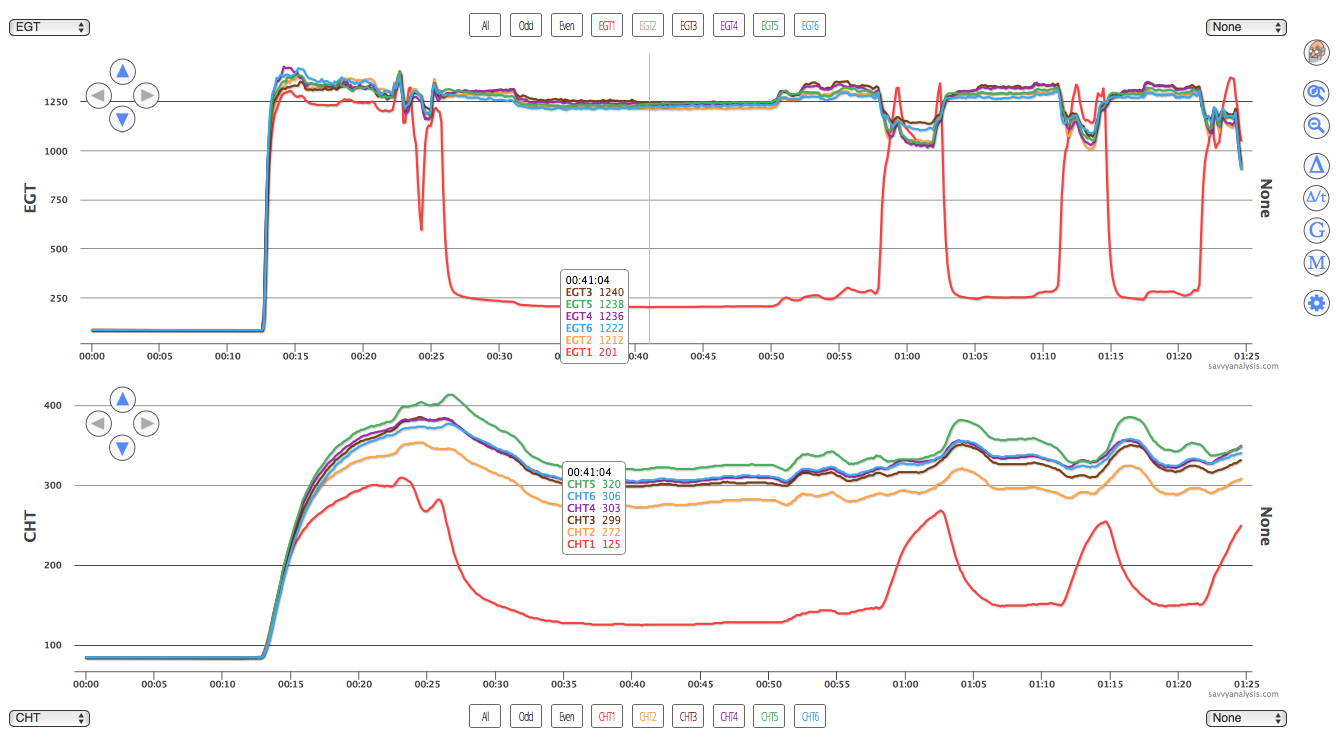 And if you’re thinking “Aha! Another valve spring” you’re probably not alone. Now let’s overlay RPMs on top and FF on bottom. 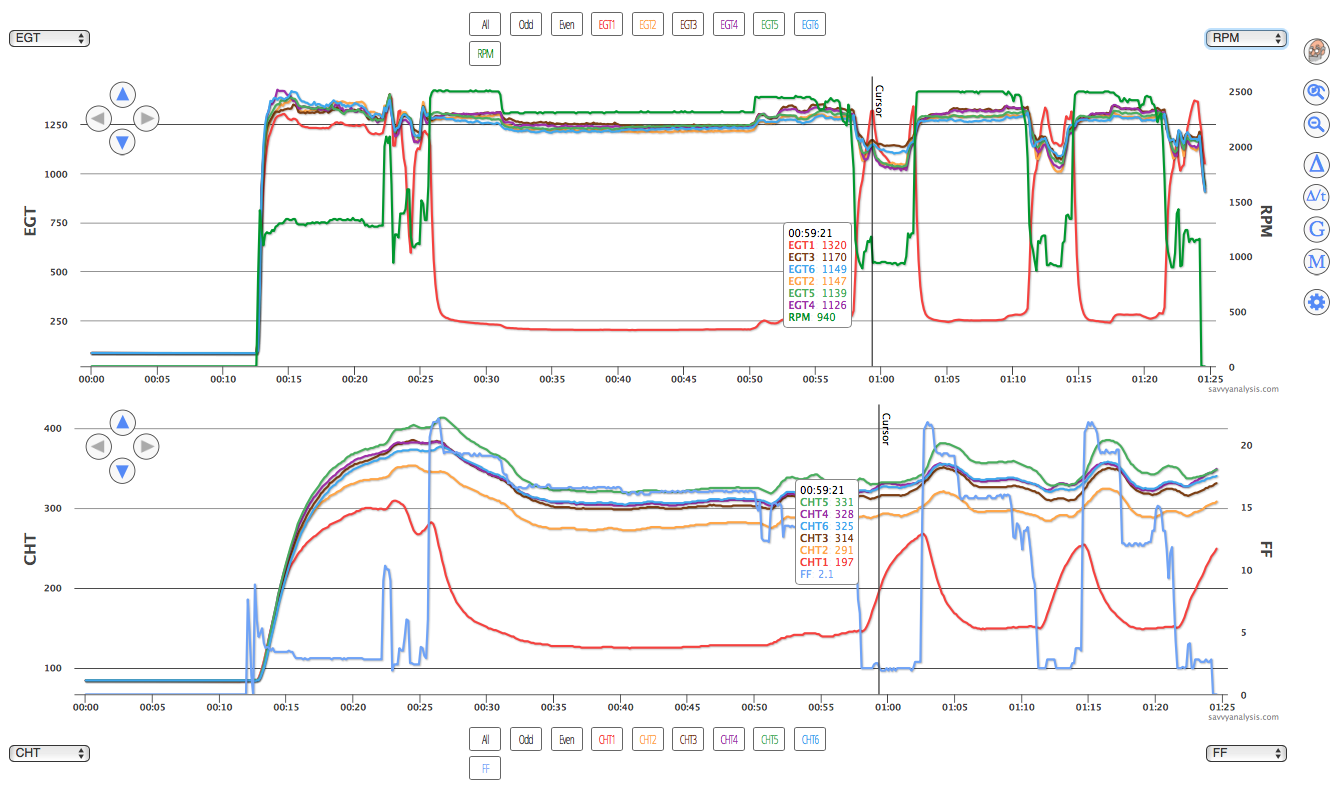 With the earlier valve spring scenario, the problem was worse at idle and less under full power. Here it’s less at idle and worse under full power. With a partially clogged injector, we should see higher EGT and CHT at max FF and lower EGT and CHT as FF is reduced. That looks like what we see here – except they never get high enough to be lean outliers. Imagine a clog that’s bad enough to let some gas through at low levels, and then clogs when FF is increased. When the client mentioned that a new fuel spider had been installed on this engine we could imagine a little glob of RTV or debris sitting quietly in the spider until it started swimming in gas.

Once the cyl fuel line and injector were cleaned, the engine ran normally again.

Here’s data from an RV-10 with an AeroSport IO-540 engine and a Garmin G3X monitor with a 1 sec sample rate. EGTs and Oil Temperature on top – CHTs and Oil Pressure on bottom. 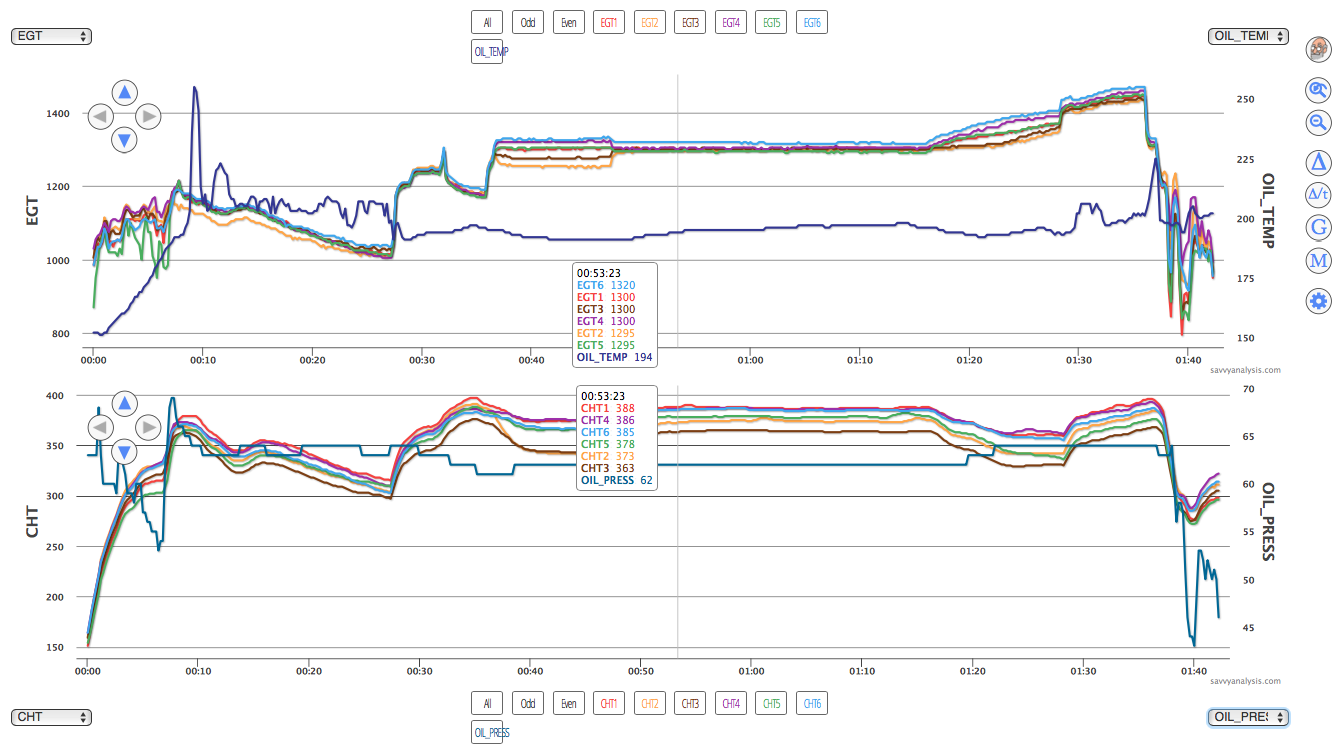 Oil temp looks fine until takeoff, then just keeps climbing, peaking at 255º before quickly dropping. Then it’s jumpy until EGTs rise at level-off for cruise, then it’s steady. Meanwhile, oil pressure remained pretty normal. Because the data settled down once the angle of attack changed, we think that’s a good argument for a loose connection. Put another tick in that column because it acts up again as the airplane descends for landing. We can’t rule out a failing probe, but a connection is more likely to correlate with angle of attack or speed than a failing probe would.

We’ll end this month with a shoutout to SavvyAnalysis Pro client Brian Lloyd, who recently flew around the world in his 1979 Mooney M20K with a Continental TSIO-360 and a JPI 930 monitor with a 6 sec sample rate. Here’s data from his 12-hour leg from Khartoum to Seeb in the Middle East. 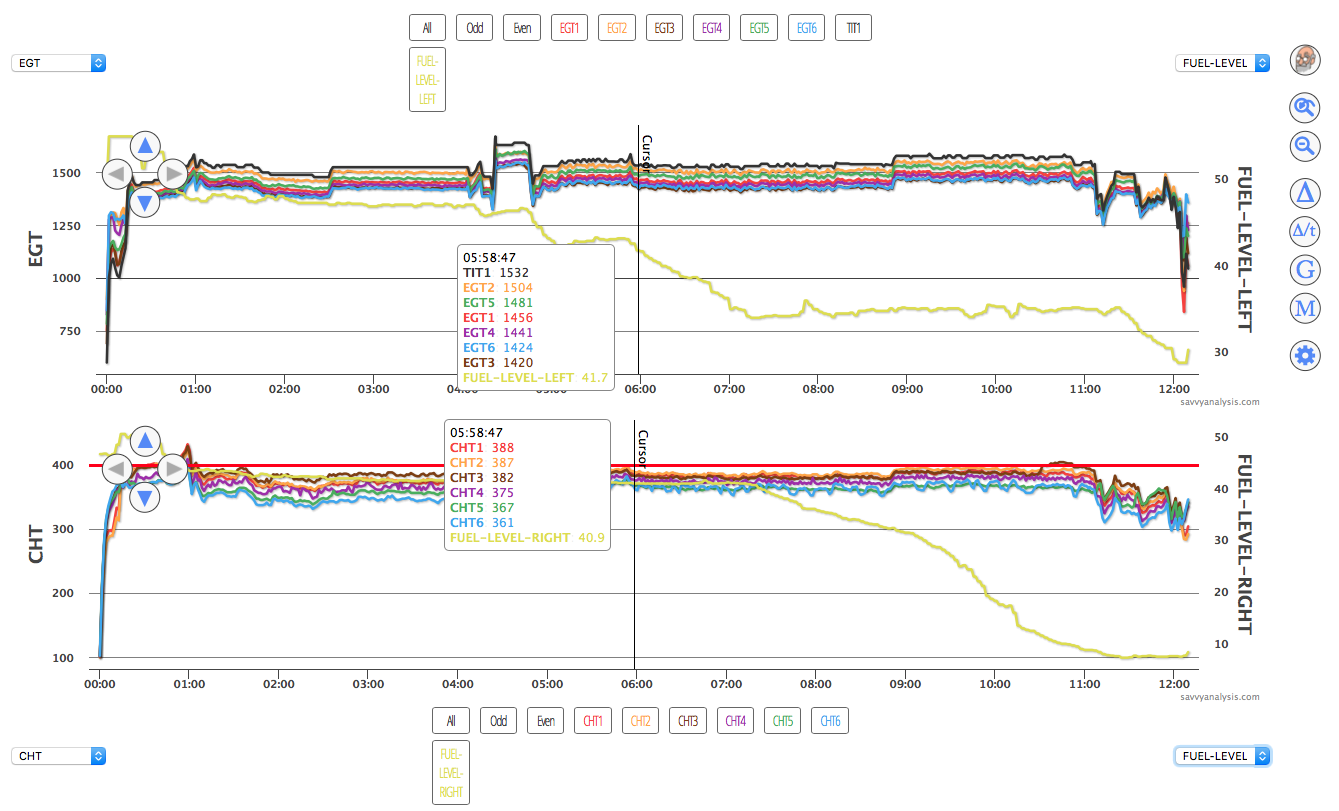 Notice the fuel tank swap at the 6 hour mark. He also has a Turtle-Pac bladder tank in the back seat. Here’s the flight map for this leg. 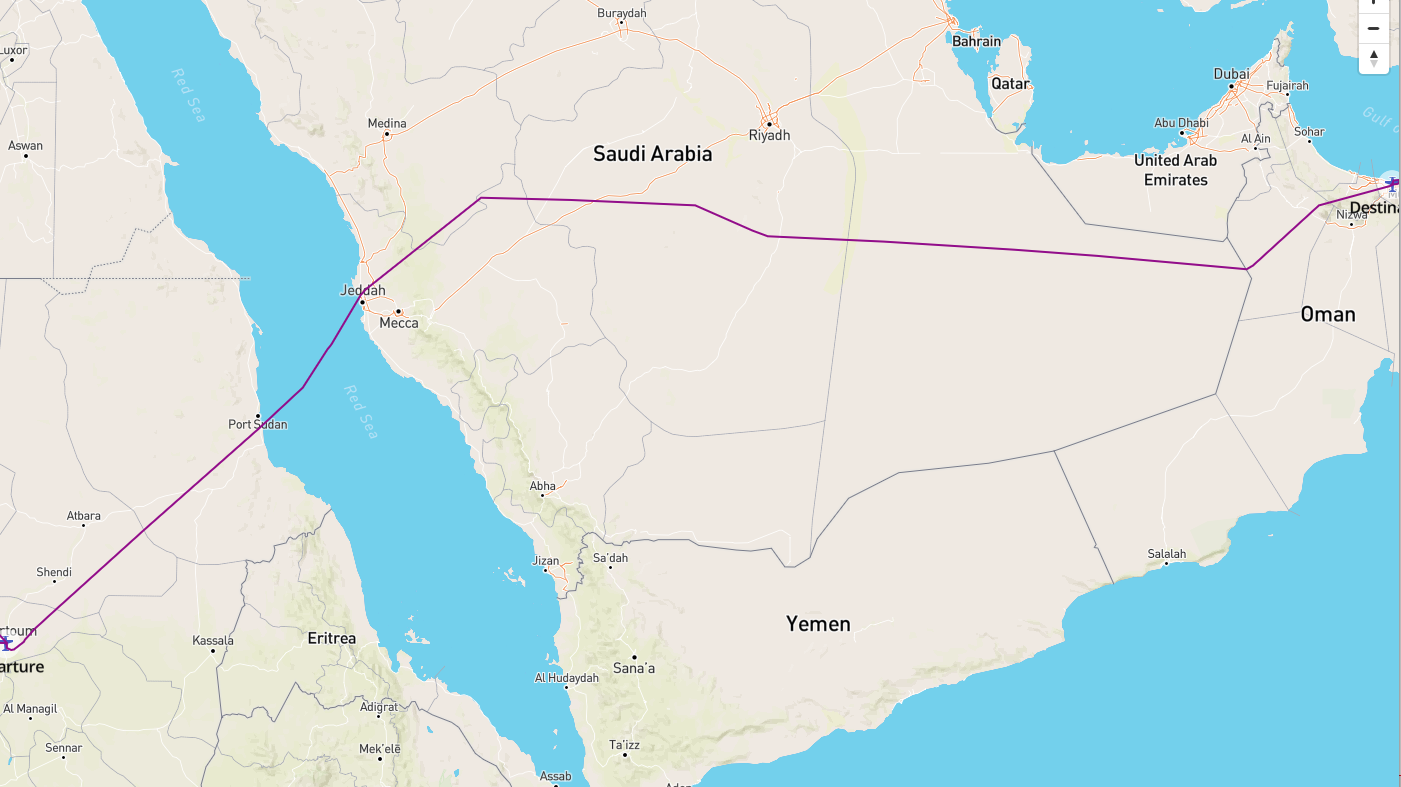 On one of Brian’s legs the engine quit. He was able to get it running again by using the electrical pump. Savvy analyst Paul Kortopates – also a Mooney owner – worked with Brain to diagnose the issue. Post-flight inspection of the gascolator revealed it was almost completely clogged with “a mostly brown, somewhat spongy, and fibrous” material. Paul and Brian came to the conclusion that the insoluble gunk created enough of a restriction to create a vapor problem in the lines between the gascolator and engine driven pump.

“It appears that the problem was caused by three things. First, the insoluble gunk in the gascolator filter required the engine driven fuel pump to suck harder to pull the necessary fuel from the gascolator up to the fuel pump. Second, the flight was at 21,000′ where the air pressure is less than half what it is at sea level. Third, cowl flaps were closed which allowed the temperature to rise. Then end result was that the fuel in the fuel line from the firewall to the fuel pump started to boil and turn into vapor. That didn’t allow enough liquid fuel to flow to keep the engine running. Once the engine quit I started down into more-dense air, and turned on the electric fuel pump which – like a car’s fuel pump – pushed the fuel up to the engine-driven fuel pump under pressure. Once the airplane was lower, cooler, and with the electrical fuel pump running, the vapor lock went away and the engine ran normally again.”