Phoebe Snow’s recording of “No Regrets” is on one of my playlists, and I can’t hear the song without thinking of the Milky Way ad where the distracted tattoo artist gives her customer something to – uh, regert. Sometimes engine data will give us something that obvious, but more often we have to dig a little deeper. Let’s see what the data from this month can show us.

Our SavvyAnalysis report form has a field for inoperative sensors. We used to just put “none” if everything appeared to be working properly, but we realized that we weren’t telling customers which sensors we had looked at to be able to say none were inoperative. Plus, we don’t automatically look at every parameter that’s logged by every data monitor. There’s lots of navigation and axis data, for instance, that don’t play a role in engine monitor data analysis. But since OAT is often important in analysis, we decided we would at least look at oil temperature, oil pressure and OAT on each flight we analyze, assuming those are logged.

With that in mind, first up is data from a Cirrus SR 20 with a Continental IO-360 and data from a Garmin Perspective using a 1 sec sample rate. GPS altitude is on top, with OAT below that.

OAT drops as expected in the climb, but near the end of the climb it rises again from about 3 to about 10. Since it started in the high teens, and because we knew (but it’s not obvious from this anonymized data) this flight was from Australia, we’re dealing with Cº not Fº, and it’s summer down under. Either we had a weird malfunction of the OAT sensor, or this climb – and the descent later in the flight – were through an inversion layer around 5000 ft. In case you’re wondering, none of the engine parameters showed a spike or a dip at those points in the flight. So we asked the client, who verified that it was unusual Ozzy weather that day, including a climb and a descent through a cloud layer.

Next up is another Cirrus SR 20 with a Continental IO-360 but this time data is from an Avidyne using a 6 sec sample rate. EGT and FF on top, CHT and RPM below that, and oil temp and oil pressure below that. 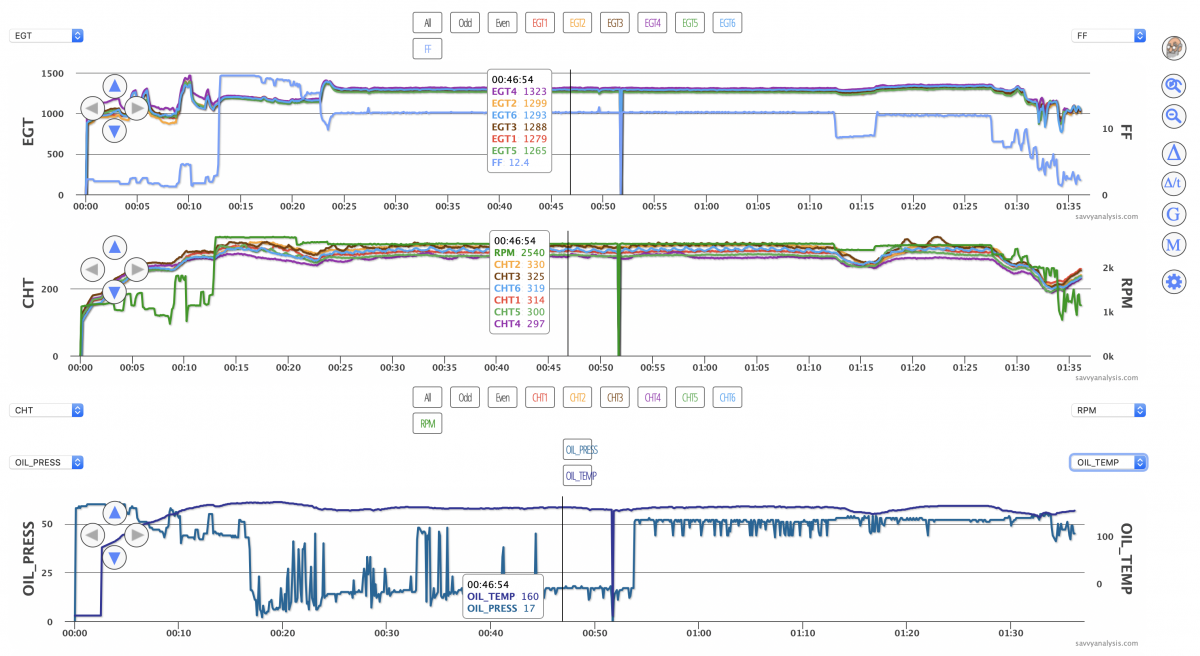 The big elephant in this room is the dropout of all data around the 52 min mark in the timeline. It was only one sample, but with an Avidyne logging every 6 secs, we can’t rule out that there were other big drops that didn’t happen to fall on the 6 sec cycle. I didn’t depict ship’s power here but it has the same pattern – one big drop. A global event like this is often related to a grounding issue.

Next order of business is oil pressure. The jumps before takeoff appear to sync with the runup data, but there’s a clear trend line moving lower until takeoff, then in climb the numbers drop into a dangerous range – if we believe it. We each have our own threshold of tolerance, and I’m not judging, but if I had seen oil pressure drop to the teens just after takeoff – and I could roll into the downwind and come back and land without shooting a low approach – I think I’d take that option. Granted, nothing else looks alarming.The flight continues with a low oil pressure indication punctuated by spikes to the 40s (psi). Then just after the global dropout, oil pressure jumps back up to a more normal range, but still punctuated by data drops. The smoothest data is during approach. This looks like a sensor issue, but it always makes sense to check the connection first.

Once that’s done, there are lots of wavy patterns in the CHTs that we often see with loose baffles and seals. Nothing in the EGT data corroborates unusual combustion.

Next up is a Cessna T182 with a Lycoming TIO-540 and data from a Garmin G1000 using a 1 sec sample rate. EGTs on top, CHTs below and FF and MAP together below that. The cursor is not on anything noteworthy, just moved it out of the way of the good stuff. Here’s the full flight. 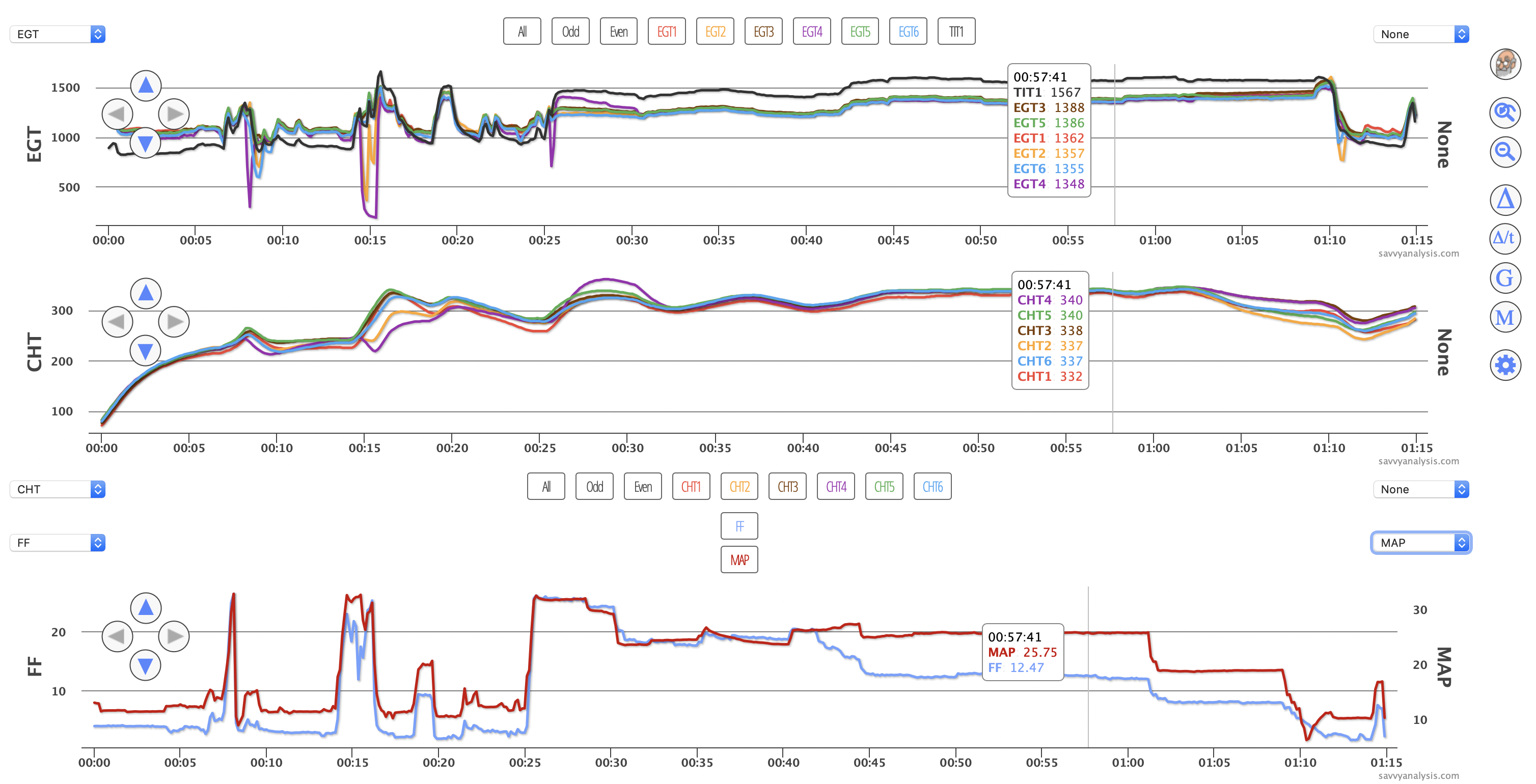 Groundspeed is not depicted, but helped identify the events. Starting on the left, there’s a takeoff at the 8 min mark which is aborted at about 75 MPH, then a static runup at about 14 mins, then another takeoff followed by a 50 min flight. Since nothing unusual happens after about the 30 min mark, here’s the same flight zoomed in to the earlier events. 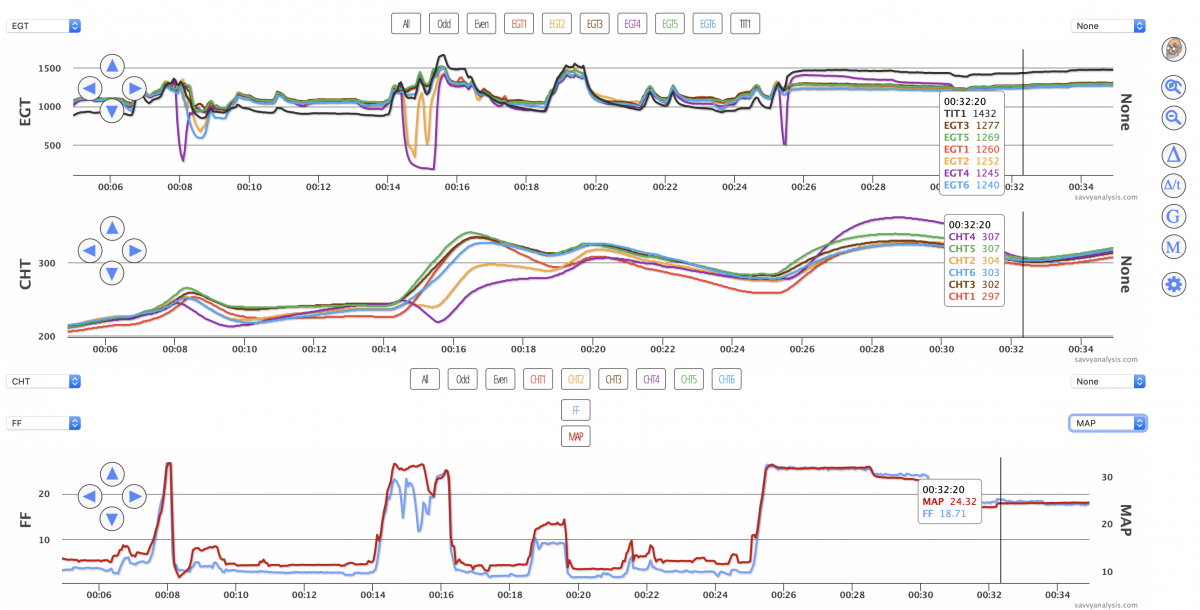 Now we can see that on the first takeoff, EGT 4 drops significantly, corroborated by CHT 4. EGTs 2 and 6 also drop a little when FF is cut for the abort. At 14 the pilot does a full power runup and this time EGT 4 drops again, and EGT 2 makes a W as it tries to fire. Again both are corroborated by their CHTs. Then there’s a mag check at the 19 min mark which went better than anything so far in this flight, also the pilot decides to take off at about the 26 min mark. EGT 4 stumbles, then climbs high for a while, as does CHT 4, then by the 30 min mark looks normal. CHT 4 takes a little longer to resume normal, but does – and the flight continues. A couple of additional data points – the flight is from a mountain airport with elev about 5600 MSL, and OAT at the time of the noontime flight is about 4º C, but it had been colder overnight. That’s the OAT at the wing root and inside the cowl it might have been colder.

Have you formed a theory yet? Is it spark, or fuel, air, or something mechanical? Here’s a theory. It starts with the observation that EGT and CHT 4 stop being high as FF is reduced in the climb. The could be because of a clog in injector 4. It was ok at idle, then got overwhelmed as it received more fuel. Did it unclog because it was moisture-related and cleared itself as it heated? That’s seems plausible.

But that doesn’t explain why cyl 2 and 6 are initially troublesome, and 2 has trouble in the static run. A clogged injector 4 wouldn’t cause that. I also struggle with why there would be moisture or possibly ice on cyl 4 being in the middle more than 2 behind it or 6 in front of it. As to why would ice form on the 2-4-6 side but the 1-3-5 side stayed normal; that could be because of the way the airplane was parked on the ramp subjecting it to wind and freezing rain.

We recommended checking injector 4 before the next flight. If it was a clog, it might have been ok at the cruise FF setting, but might be restricted again the next time it gets max FF.

Next up is a Cessna 400 Corvalis with a Continental TSIO-550 and data from a Garmin G1000 using a 1 sec sample rate. EGTs on top, CHTs below, and FF and oil temp on bottom. It’s a 23 min flight because this pilot came back and landed when things went south. 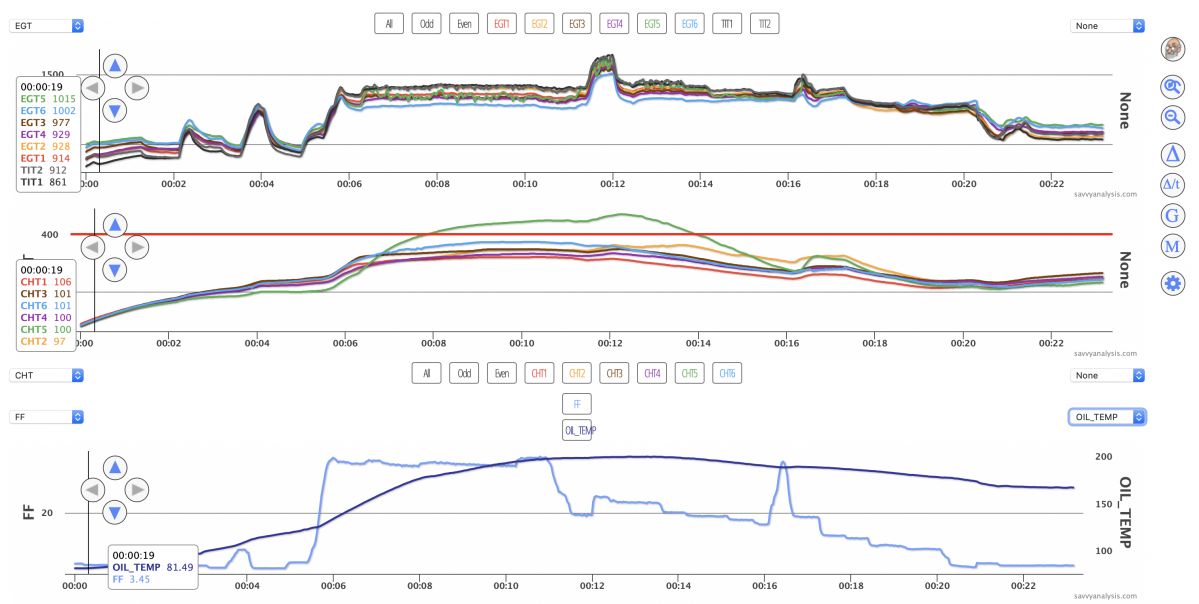 When we got this data, it looked like the problems were isolated to cyl 5. EGT 5 is ok during taxi-out, but gets erratic right after takeoff. CHT 5 is a little low during taxi-out, then quickly rises through the others on its way to a peak of 470º. The climb was well underway before the pilot reduced FF at 11 mins, and lowering FF initially sends CHT 5 higher, but the alternative of leveling off at max power to try and cool cyl 5 may not have been attractive if the plan was to come back and land. And the pilot reported that the ride wasn’t terribly rough. CHT 5 does begin to fall in response to the power reduction. Now that we’ve seen the whole flight, let’s zoom into the takeoff and climb, with EGTs 1-3-5 on top and 2-4-6 below.

This is why the initial diagnosis was a problem with cyl 5, but we recommended checking plugs and harnesses for cyl 2 as well. Meanwhile, the shop had made a decision to clean injector 5, and on the runup mag check for the return-to-service flight, the L mag failed. The distributor gear was frozen and not turning.

We think that happened after this flight and either before the next flight or maybe during the mag check itself – because we don’t see how a mag that isn’t firing at all could have given us 18 mins of data from this flight.

Feel free to leave a comment about any one of these scenarios, or share which engine data parameters would cause you to cancel a flight, or abort a takeoff, or circle back and land ?