Sometimes the data that I gather to write about has an obvious theme. Sometimes I sort of manhandle them into a common theme. This month, it’s more of a collection of independent cases.

First up is data from a Cirrus SR22 with a Continental IO-550-N and data from an Avidyne with a 6 sec sample rate. 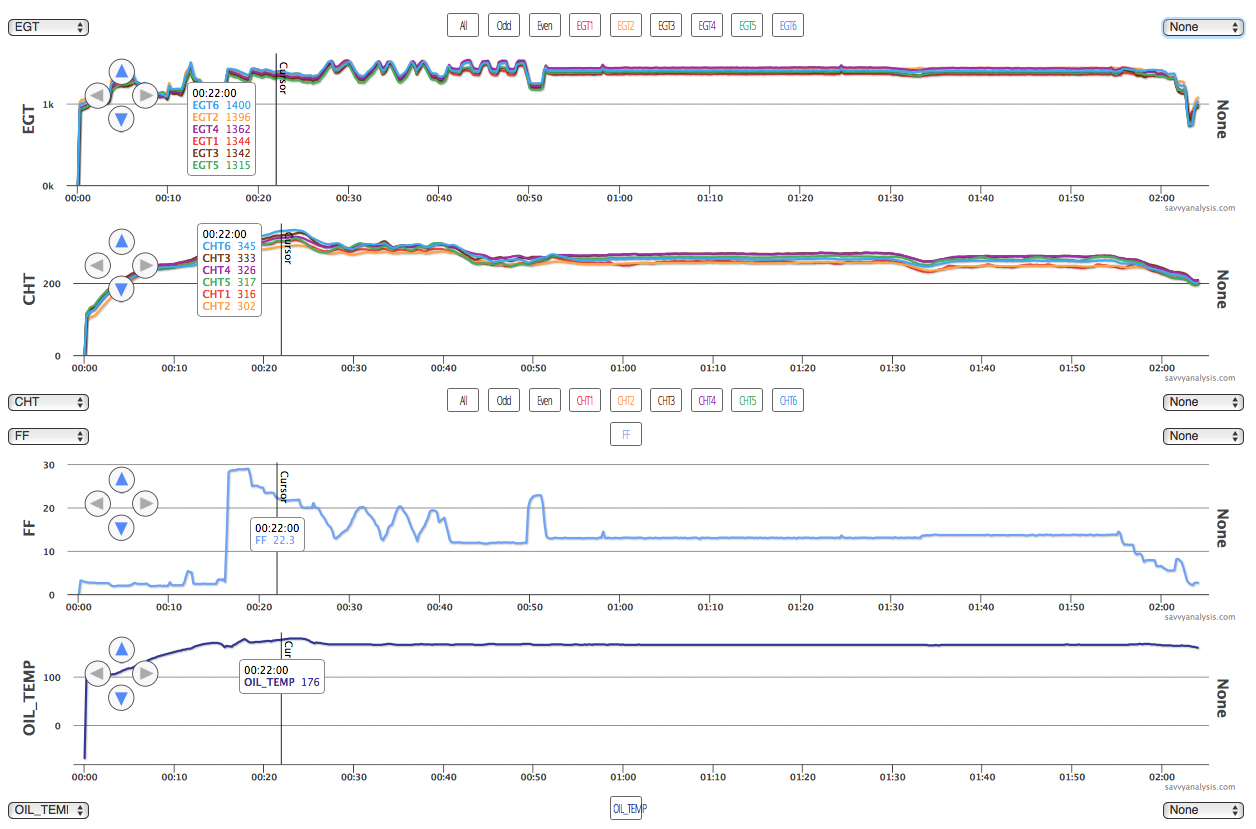 What makes it great? The consistent rate of change of fuel flow in the sweeps and enough time on each mag with lean of peak fuel flow lets us draw reliable and meaningful conclusions. Our instructions for the mag check are one set of BOTH-L-BOTH-R-BOTH, and here we have another L and R. It’s not necessary, but it’s nice to have.

Once quick note before moving on. My default setting is to display 4 charts on a page. You can change your settings using the blue gear-shaped tool at the bottom of the tool menu on the right side of any data page.

Here’s another approach to the GAMI sweeps. This is from a Cessna T-182 with a Lycoming TIO-540 and data from a Garmin G1000 with a 1 sec sample rate. 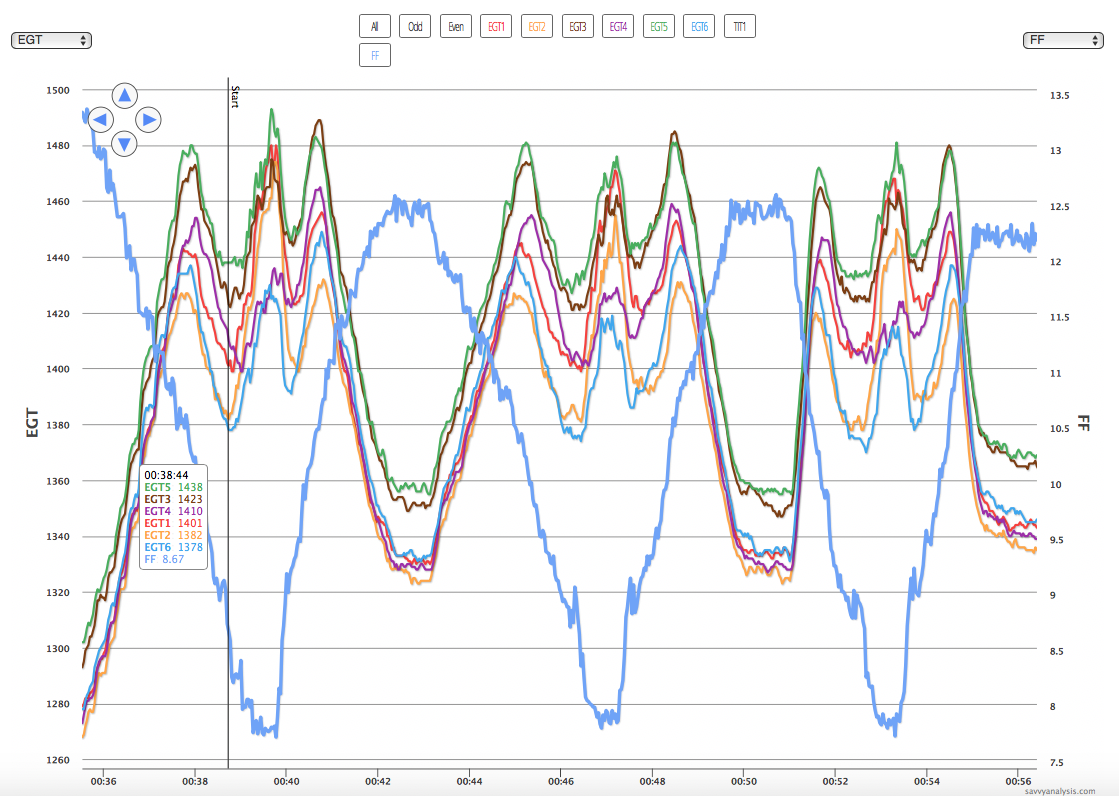 Why are there three EGT peaks? Our instructions say to lean to the onset of engine roughness. Actually, we had all the data we needed to compute the GAMI spread by the first valley where the cursor is. Just a cursory glance (groan)  shows that EGT peaks are pretty close, and the mixture got down below 8 GPH before he apparently encountered roughness and richened again.

From our end, there’s no problem with this. It’s easy to mine the data we need. It’s just that from your end, there’s no value in going leaner than the onset of roughness. If your GAMI spread is so good that you get three distinct peaks before one of your cylinders starts to flame out, be happy.

Here’s data from another Cirrus SR22 with a Continental IO-550-N and data from an Avidyne with a 6 sec sample rate.

CHT 3 is a problem. EGT 3 is not high throughout, so if it’s not a combustion problem could it be friction from a broken piston ring? Looking closely, not only is it high throughout the flight, it was high when the power went on, before the other cylinders even registered heat. CHT 3 is 185º after 12 secs, while the other CHTs are still posting zeros.

In past Puzzlers we’ve seen probes fail dramatically with spikes and drops. You’ve gotta give this one credit – it’s tracking perfectly, just living in a parallel universe.

By the way, that series of peaks and valleys starting at 01:20 is not GAMI sweeps. It’s a series of six takeoffs and landings.

Speaking of dramatic, here’s data from a Cessna 350 with a Continental IO-550 and data from a Garmin G1000 with a 2 sec sample rate.

This is a series of three takeoffs and landings. TIT 1 starts low and rises gradually, but never gets to the range we expect and doesn’t track with EGTs. TIT 2 starts a little higher than 1, rises quickly, drops to zero, jumps backup then jumps around. One of the goals of the Puzzler column is to help recognize bad data as it’s happening so that we don’t act rashly on bad information. It looks like the goal here was to complete 3 and 3 currency, if you ignore TIT data everything else looks ok, and he never got outside the pattern.

We’ll finish this month with data from an SR-22T with a Continental TSIO-550 and data from a Garmin Perspective with a 1 sec sample rate. This is the first 22 minutes of a one-hour-twenty-minute flight. 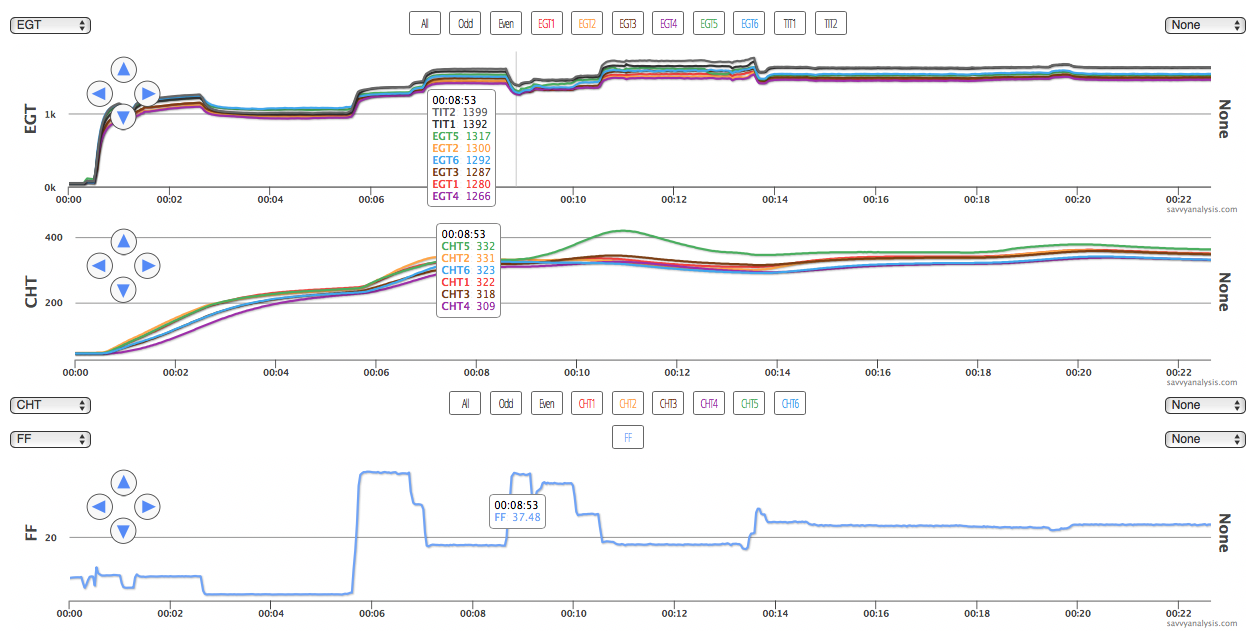 Takeoff is at about the 6 min mark. The first FF reduction is a level-off at 220 MSL. FF goes back up when the climb resumes. I placed the cursor at the beginning of the CHT 5 excursion – at 332º, and there’s a light dip in FF there. The airplane is still climbing. The pilot reported very rough running, determined that the R mag was rough but the L mag was smooth, and stayed on the L mag. EGT 5 is highest of the six, but not by much. It’s not mirroring CHT5, which is still climbing and about 2 mins later it peaks at 419º. The pilot finishes the flight on the R mag, lands, and submits this data.

What would send one – of six – CHTs very high while that cyl’s EGT climbed just a little? Weak spark should send EGT 5 higher, not just a little, and will usually send CHT lower. We’re not seeing that. Poor cooling could send CHT higher without elevating EGT, but this is a quick rise in CHT, and no other CHT moves much. If 5 got that hot because of a cooling blockage – let’s say an overlooked shop rag – we should see a little of that in 3 and 1. We’re not seeing that.

We know that the R mag was rough and at some point it gets shut off. My guess is that happens about where the cursor is on my screenshot, and the CHT 5 excursion starts. On this engine the L mag fires the bottoms of 1-3-5 and the tops of 2-4-6.

At takeoff power, with both mags running, EGT rank is 5-6-2-3-1-4. At 09:30 with the CHT 5 excursion underway, and after the rise in EGTs that was presumably the R mag being shut down, EGT rank is still 5-6-2-3-1-4. One extraneous but important fact: this TSIO-550 does not have independent control of RPMs. RPMs (not depicted here but you can overlay them using the anonymized chart) are 2490 from takeoff to approach.

While we were trying to figure out why CHT 5 – and not EGT 5 or other CHTs – got hot, the shop was investigating the failed R mag. After removing it, they noticed several teeth missing from the gears. So here’s our theory.

As the pilot resumes the climb at 08:38, and MAP goes from 29″ to 36″, the teeth on the R mag shear off. It’s able to freewheel enough to initiate a thermal runaway in cyl 5. It probably would have become a full detonation event had the pilot not killed the R mag. Killing the R mag stops whatever accompanying EGT change we would have seen, but CHT is slower to react. The power reduction at the 10 min mark breaks the chain, CHT 5 cools, then engine is running smooth on the L mag and the flight continues.

CHT 5 stays high, but EGT 5 isn’t, and there’s an interesting slight rise in CHT 5 until approach. About 5º every 6 minutes by my count. That still looks like a cooling issue, but in the big scheme of things it’s not much of an issue.

You wouldn’t knowingly take off with a mag with faulty gears, and especially now that you’ve seen how quickly bad timing can change the combustion outcome.