I’ll admit stealing the title from Stephen Jay Gould’s work on paleontology. I’m a big fan of his writing and he left us far too soon. So what’s the connection to engine data? It’s a stretch, and it’s not my area of study, but here goes. Until Gould – and his co-author Niles Eldredge – shared their observations, evolutionary biologists had seen the value of changes in species, but had largely ignored stasis – periods of no change in-between. Gould and Eldredge recognized that stasis – a lack of change – is in itself data. If we rename stasis to equilibrium, then the punctuations reflect changes in the data.

This came to mind because lately we’ve seen charts where something changed unexpectedly, or the data suggested something changed but the data was lying, or something should have changed, but didn’t. Let’s look at some examples. First up is data from a Continental IO-550-N in a Cirrus SR 22. 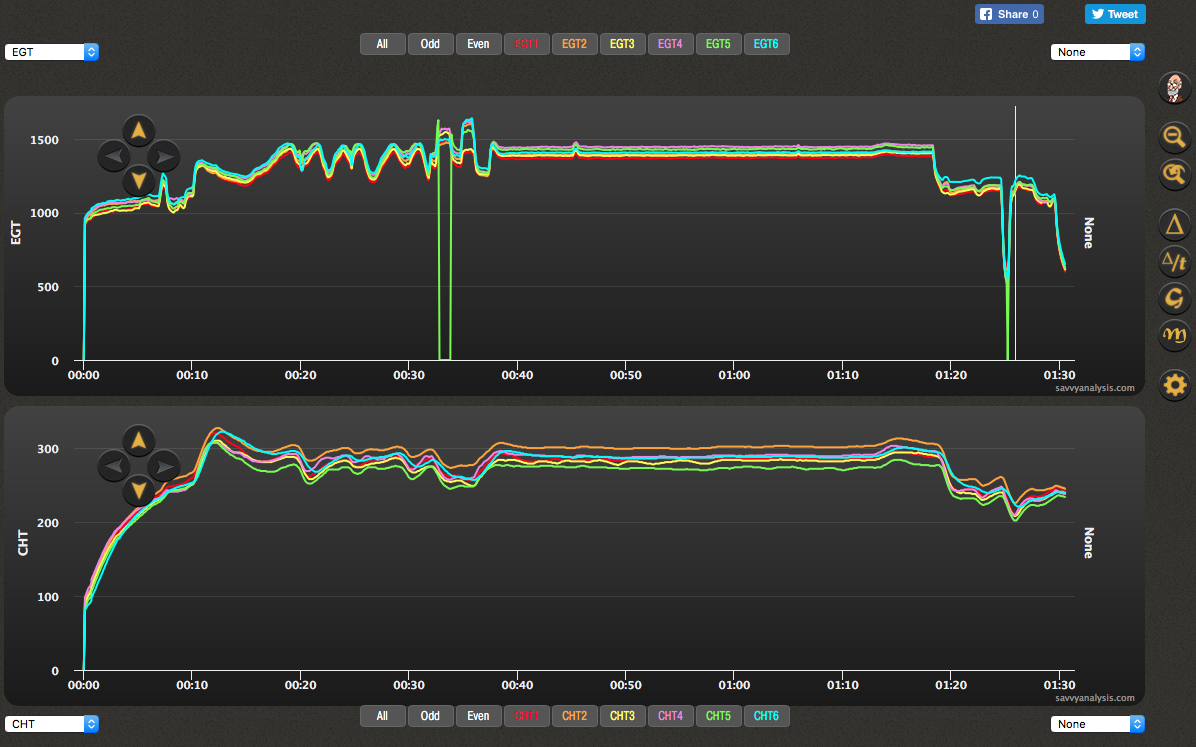 There’s a series of mixture sweeps followed by mag check. The punctuation in the equilibrium that draws your attention is that drop in EGT 5 – the green trace – to zero. Dropping to precisely zero is in itself suspicious. The cylinder was making power on both mags, then the key was turned from both mags to one mag, and this data would have us believe that there was instantly no residual exhaust in the pipe, and the temperature went to 0 deg F, or 32 deg below freezing. Let’s zoom in. 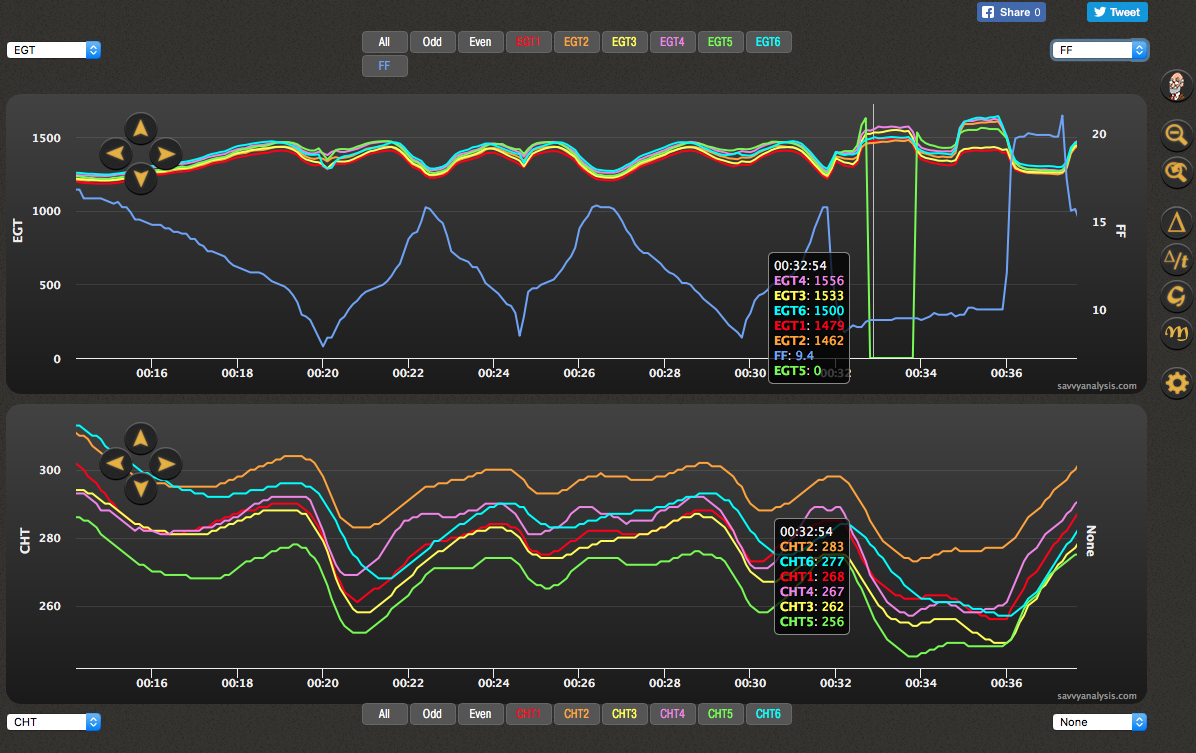 When the data was submitted the pilot reported some roughness on the L mag. And we can see in the data that CHT 5, which was already low, is lower on the L mag than on the R. With that context, what caused the reading of zero on EGT 5?

With a clogged injector we would expect to see cylinder five running lean and maybe even flaming out at the leanest point of the mixture sweeps. EGT 5 is high but not really an outlier, and even zoomed in to here appears to peak last on the rich-to-lean sweeps and first on the lean-to-rich sweeps. There’s not much evidence to support the theory of a clogged injector. That leaves a faulty probe, or a bad plug which gave the probe such a high number that it gave up and displayed zero.

Notice that when the left mag is checked, there’s a dramatic rise in EGT 5 before its big drop. Sometimes we see EGTs that flatline at their high limit, which could be 1650 or 1700, depending on the brand of the monitor.

If it’s a bad probe, it’s only bad at this point then again later when fuel flow is reduced to idle. Is there other evidence in the data to support the failed probe theory? Remember the pilot reported some roughness on the L mag and we noted that CHT five is lower on the L mag than the R. Neither of those would happen if this were simply a failed probe.

So our recommendation would be to check the bottom plug of cylinder 5 – on this engine the L mag fires the bottoms of the odds. What are you looking for when you check the plug? Mike Busch has an excellent webinar called All About Spark Plugs. 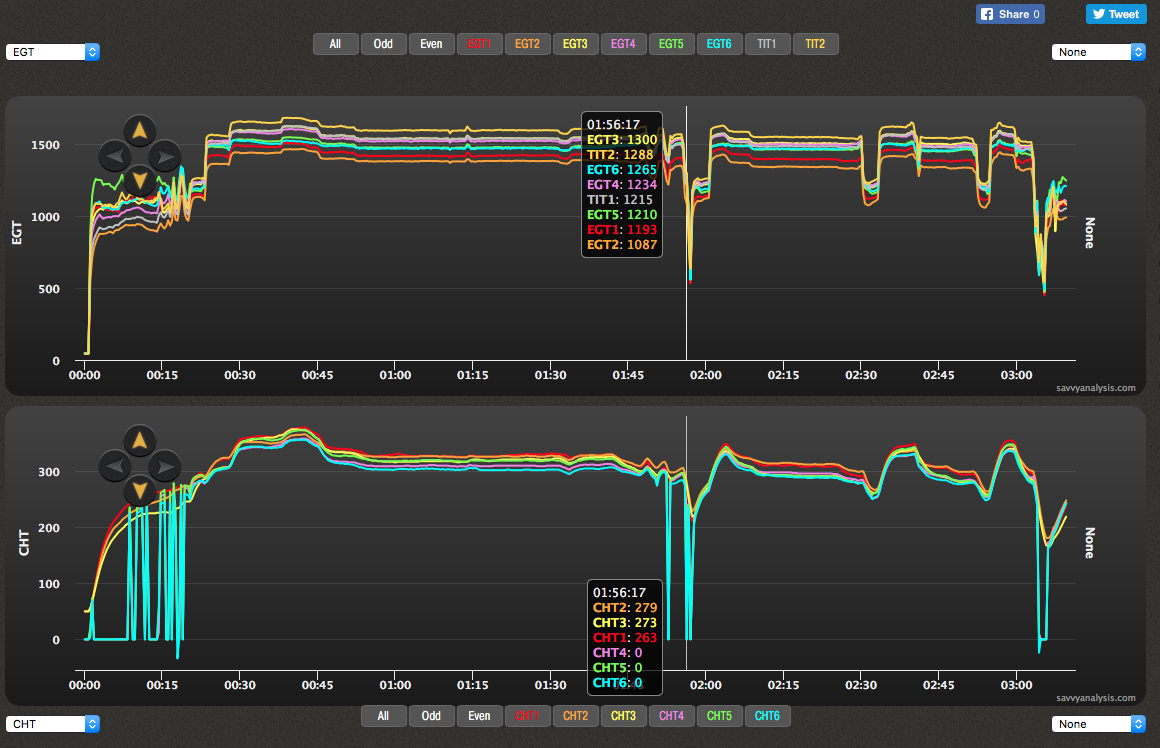 At first glance it looks like CHT 6 – the cyan trace – is dropping to zero. The numbers in the box show that it’s worse than that – 4, 5 and 6 are all dropping – 4 and 5 are masked by the trace for 6. We can rule out actual failure of 3 cylinders in a variety of ways. In no particular order:

EGTs for those cylinders look normal.

The CHTs drop not just to zero, but to negative numbers low enough that the zero line moved up on the Y axis to reflect that.

CHTs can’t change that fast, given their thermal mass.

It’s reasonable to assume that a pilot would not take off with half an engine.

There may be more but that’s enough.

As Strother Martin said in Cool Hand Luke, “What we’ve got here is failure to communicate.”

The surprise is that it’s 4, 5 and 6, not 2, 4 and 6. We can assume the evens share a common path at some point forward of the firewall. Harder to assume that about 4, 5 and 6. But they may share a common Molex connector as they pass through the firewall, and that would be our recommendation about where to start.

So far we’ve seen data that exaggerated and flat out lied. Here’s data from a Cessna 182 with a Lycoming O-470 -U engine. 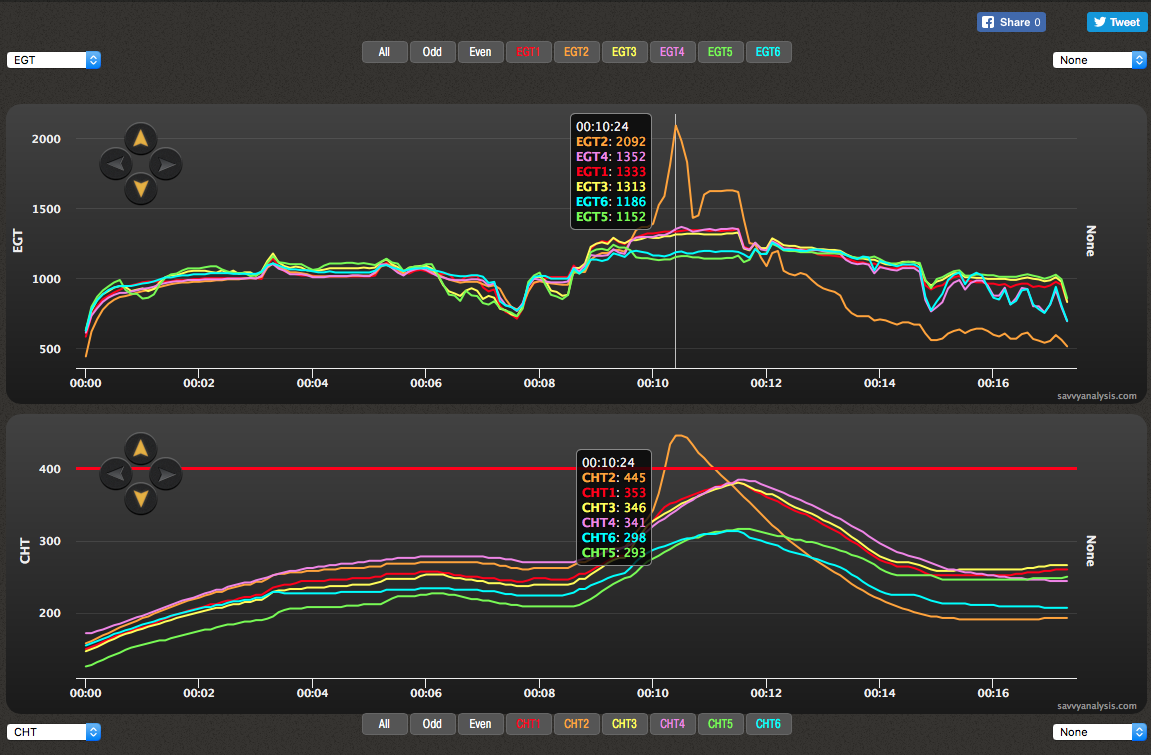 This EGT probe didn’t give up, and tracked right to 2000 deg and beyond. That’s when the exhaust valve fails, compression stops, and residual heat dissipates. On short final you can see EGTs 4 and 6 starting to confirm the change in combustion.

Here’s the valve, in the cylinder and on the bench.

Did the data show this coming? No, in recent data for this 182 there’s no indication of the FEVA pattern – a repetitive oscillation in EGT growing worse over time. FEVA can detect the pattern of a burned valve turning in service – if the pattern is present – but not all valve failures are caused by burned spots. The presence of the FEVA pattern is just one event that would trigger a borescope recommendation. Savvy recommends borescoping cylinders during annual inspections, or if the equilibrium is punctuated with an oil consumption increase, or if oil analysis shows a spike in aluminum (from piston pins), or when spark plugs show oil fouling.