Some words just mean what they mean and that’s all you get. Some words give you options. Scramble can be a verb or a noun. It can mean to order fighter jets into the air immediately, or a way to cook eggs, or a disordered mixture of things. When we confuse or mask radio transmissions so they can’t be intercepted we call it scrambling. If you see scrambled eggs on somebody’s hat you’d better salute. On a golf course it’s a way for a foursome to ignore the three worst shots. Mine are frequently ignored.

Sometimes engine data will arrive as a scramble, as in disordered mixture of things. This week I was looking at data for a Cirrus SR22 and noticed the TIT traces were all over the place. Mostly low, jumpy throughout, sometimes erratic – but EGTs looked ok. I happened to glance at max FF and it was around 28 GPH. It should have been closer to 35 for a turbo-normalized 550 or 38 for the TSIO-550-K. Max MAP was 29ish. So this wasn’t a turbo after all. No turbo, no TIT – so what were those probes logging? And were there actual probes installed, or was this just bogus data due to an improper engine monitor setup? Our parser had no reason to question the data, so it dutifully displayed it for me. Fortunately I have a tool to hide distracting data.

On the flip side, when we merged the Mx and Analysis ticket systems about six weeks ago, some 4- and 6-cylinder airplanes became 2-cylinder airplanes. So we were missing important data. We think we have found them all, but if you see the wrong number for your engine, you can fix it with the edit button – or open a tech support ticket and we’ll fix it.

Let’s start this month with data from a Lancair IV-P with a Continental TSIO-550 and data from a Garmin G3X. 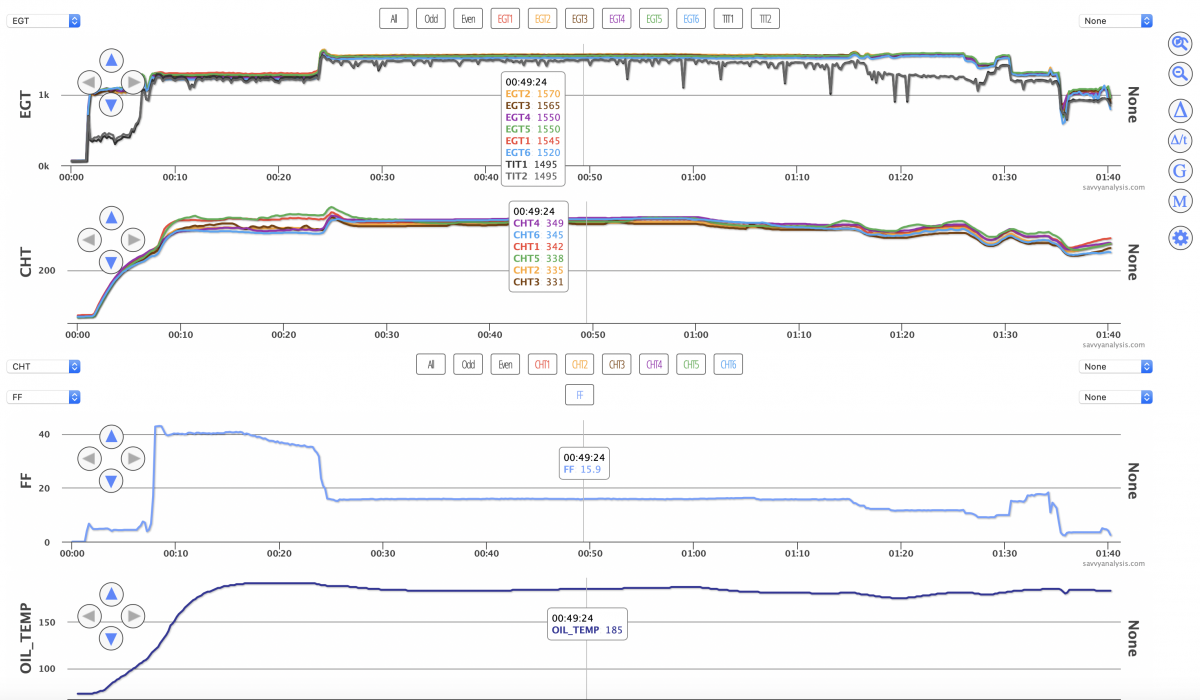 The request that came in was about the CHTs in climb. Traces for 1 and 5 – red and green – jump out from the pack when power is applied. 3 is lower with some waves in the pattern. What’s causing that? Are they all running lean? EGT 1 is highest, but not really an outlier. 3 and 5 are in the pack. And when FF drops around the 01:15 mark CHT 5 is still high. So none of the symptoms of running lean due to an injector clog.

Because CHTs 1 and 5 re-join the pack when FF is leaned for cruise – and the angle of attack changes – this looks more like an issue with cooling baffles.  If the baffles on either side of cyl 3 got a little out of position, it could cause 1 and 5 to run hot and 3 to run cooler. It’s nice to have uniform CHTs, but even with the disparity these CHTs aren’t cracking 350º and, uh – there’s this problem with TITs.

So I scrambled the team – as in dispatch fighter jets, not as in ignore golf shots – to figure out what could be causing those regular but not precise drops in TITs – both of them. And sometimes TITs are identical, and sometimes they’re similar, with a 20º difference. It’s almost the opposite of a FEVA pattern, but that’s an oscillation caused by valves turning and these EGTs are steady. So we come up with everything we can think of – check the exhaust risers for leaks, check all the clamps, look for white or grey streaks indicating an exhaust leak. We couldn’t come up with a reason why a leak would have a pattern, but since any leak is potentially lethal we thought it was worth investigating.

When we shared our concern about these rogue TITs our client told us they’re false alarms, they’ve been there since the G3X was installed and they go away when he turns the strobes off. So now we have a note about that and we won’t be crying wolf every time we see it.

Next up is data from a Waco YMF-5 powered by a Jacobs R-755 and data from a JPI 930. It’s nice to see that an engine introduced in 1936 can benefit from today’s technology. Here’s a flight where cyl 6 gets hot at takeoff. The horizontal red line is the alert set for 450º and 6 peaks at 456º before dropping again. I kept the cursor away so it was easier to see the pattern. 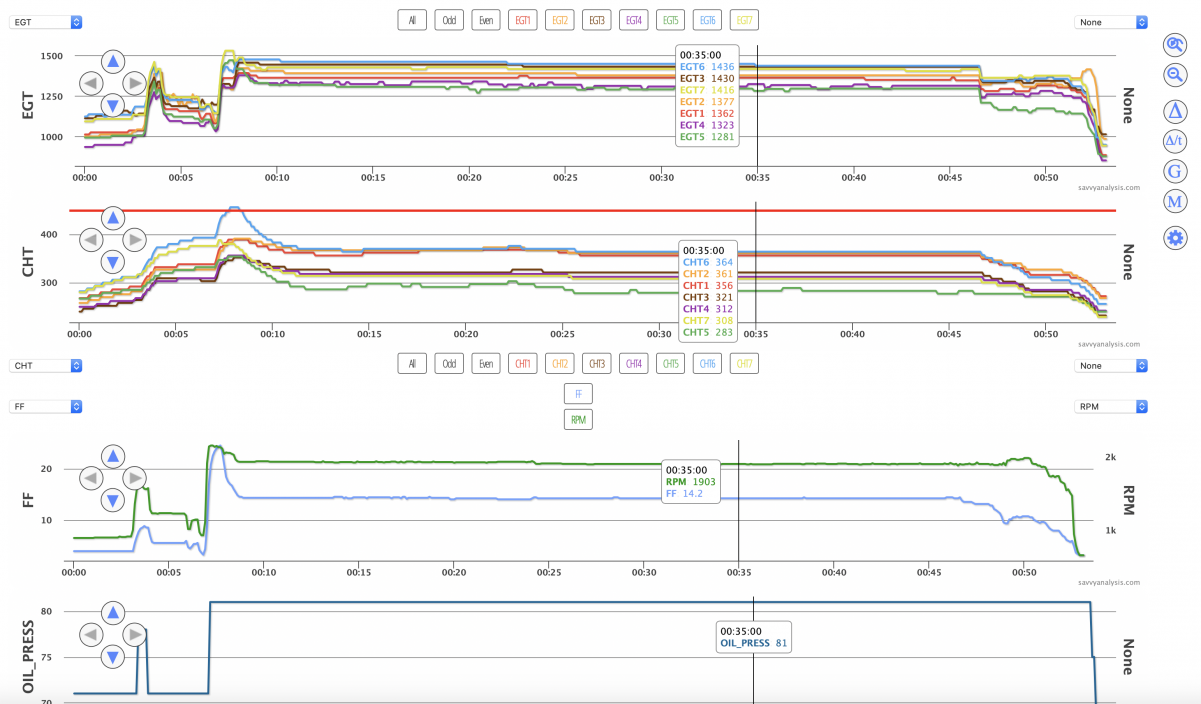 So was this a detonation event? EGT 6 doesn’t drop dramatically, which we usually see with detonation. And CHT 6 looks ok for the rest of the flight. EGT 6 looks steady. Now let’s look at the next flight. We join the flight in progress at 2129 RPMs. Look at EGT and CHT 6.

This time EGT 6 has dropped, and stays low, and CHT 6 peaks at 558º before the pilot yanks the mixture and ends the event. Cyl 6 limps along for 22 more minutes, then stops making power when the barrel fails. Fortunately the other 6 cylinders behave and the pilot gets on the ground safely.

With the benefit of hindsight, it might have been smart to borescope cyl 6 after the first CHT excursion. Or maybe check the plugs for a cracked insulator. Or both. On this last flight, CHT 6 was above 400º for about 10 minutes, and most of that above 430º – the red alert line is still 450º.

Next up is data from a Cessna 310Q with Continental IO-550 engines and data from a JPI 760. The cursor is on the high point of R engine CHT 5. 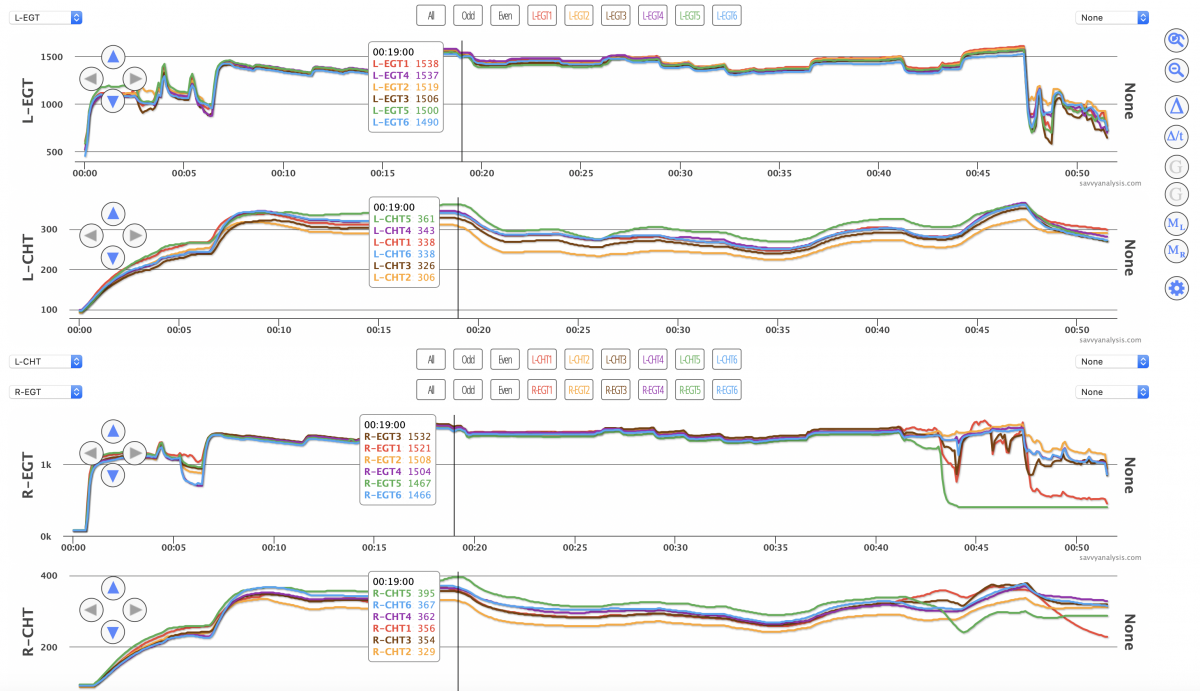 So the peak CHT on 5 is 395º. It’s higher than CHT 5 on the L engine, and it’s higher than the other cylinders, as is L CHT 5. It’s not really giving a warning that in about 22 minutes it’s going to fail. Looking back over recent flights nothing jumps out. Examination revealed a cracked barrel as the source of the failure.

We’ll wrap this month with data from an RV-14 with a Lycoming O-320 and data from a GRT EIS-4000. This is a 12-minute flight segment which is what GRT files look like if you don’t stitch them together. The instructions for concatenating – stitching – those files together are on our FAQ page – second item from the bottom. 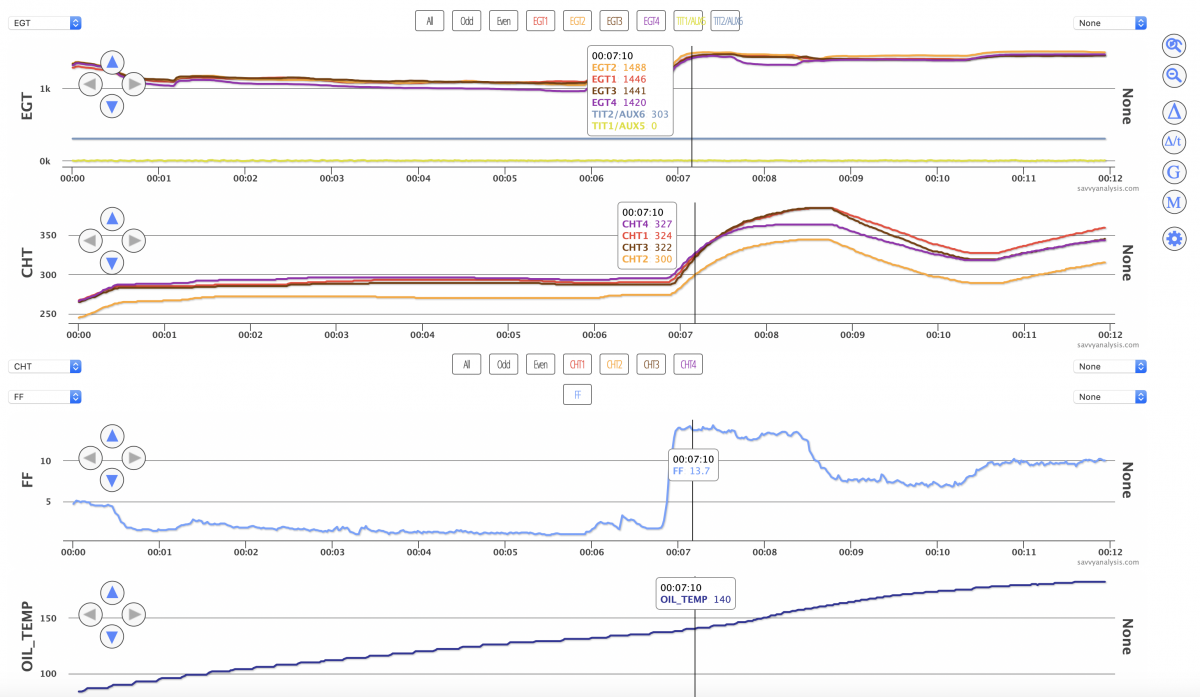 There are those pesky phantom TITs again – but this time they’re flatlines and as easy to ignore as a stray golf shot. What’s puzzling about this? Nothing. What caught my eye is when I looked at data for Bus Voltage. Here’s the whole 12 minutes with Bus Voltage isolated.

If you think about a 50’s era experimental-amateur built plane, maybe a Pober Jr, and the “avionics panel” might have been a single com radio, you could probably live with this type of noise in the voltage. But this RV-14 probably has some glass, and as of next month it’ll have at least ADS-B out, and the avionics will probably perform better and maybe live longer with a steadier voltage source.