Sully and The Music Box

Like millions of others, last week I saw Sully recently. If you’re a pilot, I don’t see how you avoid wondering what you would have done with a powerless airliner at 2800 feet and no good options. I’m not giving anything away to tell you that one of the great lines in the movie is Capt. Sullenberger realizing that despite his 42 years of experience, he’ll be judged on the three and a half minutes between when the birds hit and the water landing. I think all pilots hope they’ll do as well when tested.

I also recently watched – for about the thousandth time – the Laurel & Hardy classic The Music Box. Stan & Ollie are delivering a piano, and it brought to mind a comment from film director Chris Guest about comedy. I’ll paraphrase: If they just pull the piano out of the wagon and there’s no staircase, they carry it up to the front door, ring the bell and say “here’s your piano”, there’s no story – no comedy.

As I scrub charts choosing what to write about each month, I’m not looking for comedy but I try and find charts with a good story. Most of our work as analysts is recognizing anomalies and proposing remedies. Sometimes it’s just recognizing bad data. But many of those aren’t great stories. If we just look at a chart with an obviously clogged injector and I tell you that cleaning it made the roughness go away, it’s a bit like Stan and Ollie saying “here’s your piano.”

I say all this because I had a tough time choosing charts for this month. We had a lot of work, but most of it was like Sully’s 42 years before Cactus 1549 – rewarding and helpful, but unremarkable. No cylinders falling off, no catastrophic engine failures, no rods through the case, no landing in the Hudson.

As an organization, Savvy is happy that we’re encountering fewer incorrect FF and RPM settings, that dangerously high CHTs are rare, that powerplant management among our clients is better than ever, and that our services are helping aircraft owners receive more effective and efficient maintenance. So let’s get to this month’s data.

We’ll warm up with a normally aspirated Lycoming IO-360 in a Piper PA-28 Arrow IV. EGT and FF on top, CHT and MAP on bottom. 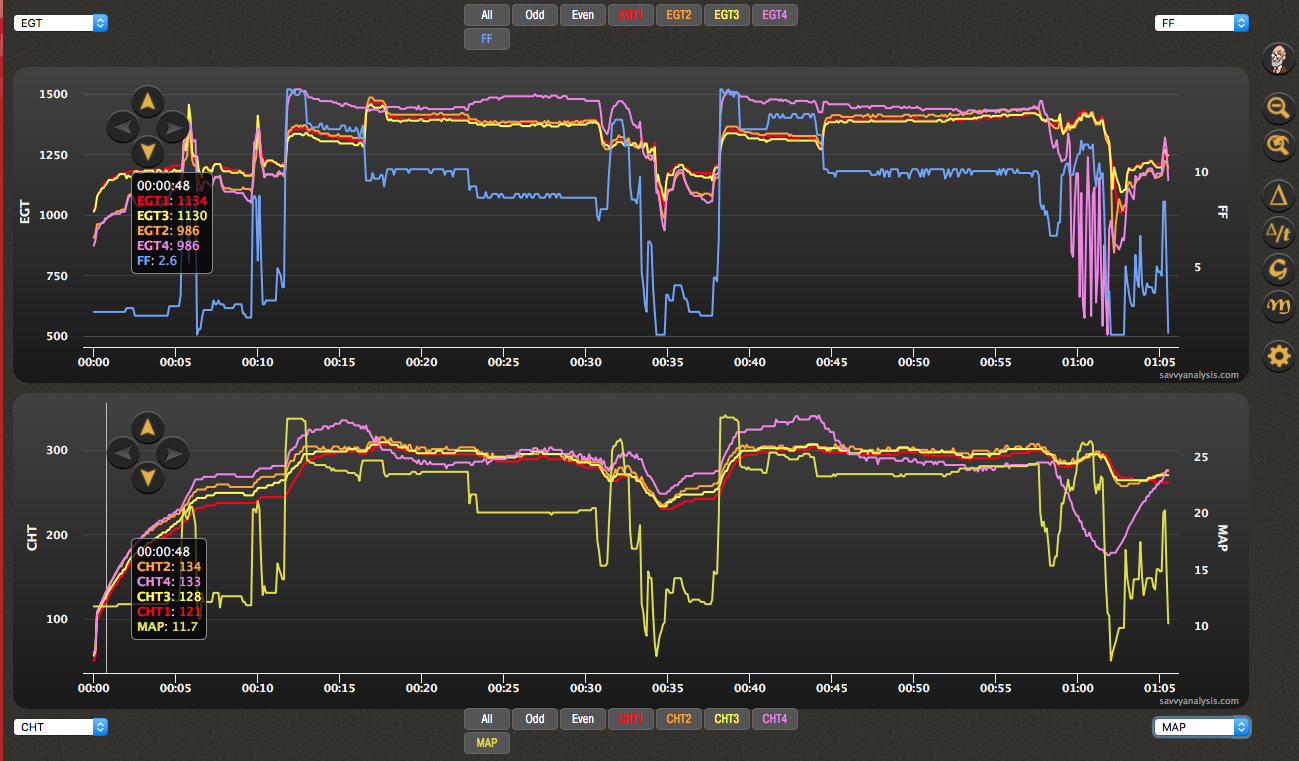 EGT 4 is high. First, do we trust the data? CHT 4 basically moves when EGT 4 moves, and in the same direction. It’s not a perfect correlation, but there’s a connection. So we can rule out a rogue probe and a bad connection. If it’s real, is it a bad plug, is it a fuel problem or maybe an induction leak? It doesn’t look like spark, because weaker spark should result in poorer combustion and lower CHT – and we’re not seeing that. It doesn’t look like induction because it doesn’t change much when MAP changes, and the post-engine-start MAP of 11.7″ is low enough to rule out a leak.

It doesn’t really look clogged until takeoff. It’s passing fuel during ground ops with FF under 3 GPH. Then it’s high until the first descent and landing, then ok again, then high until the 57 min mark where it balks when FF drops below 8, then ok again for ground ops with FF around 3-5 GPH. It’s not as simple as “here’s your piano” but the preponderance of the evidence points to an injector clog vs the other options. We recommended cleaning injector 4, our client opted to clean them all, and post-cleaning flight data showed normal EGTs all around. It was a tiny piece of FOD in the top of the #4 injector.

Mags, Plugs or Something Else?

Next up is a mag check from a Cirrus SR22 with a Tornado Alley Turbo-Normalized Continental IO-550. I’m using our new mag display (the gold letter M under the gold letter G in the right-side toolbar) to put odd EGTs on top and even EGTs on bottom. 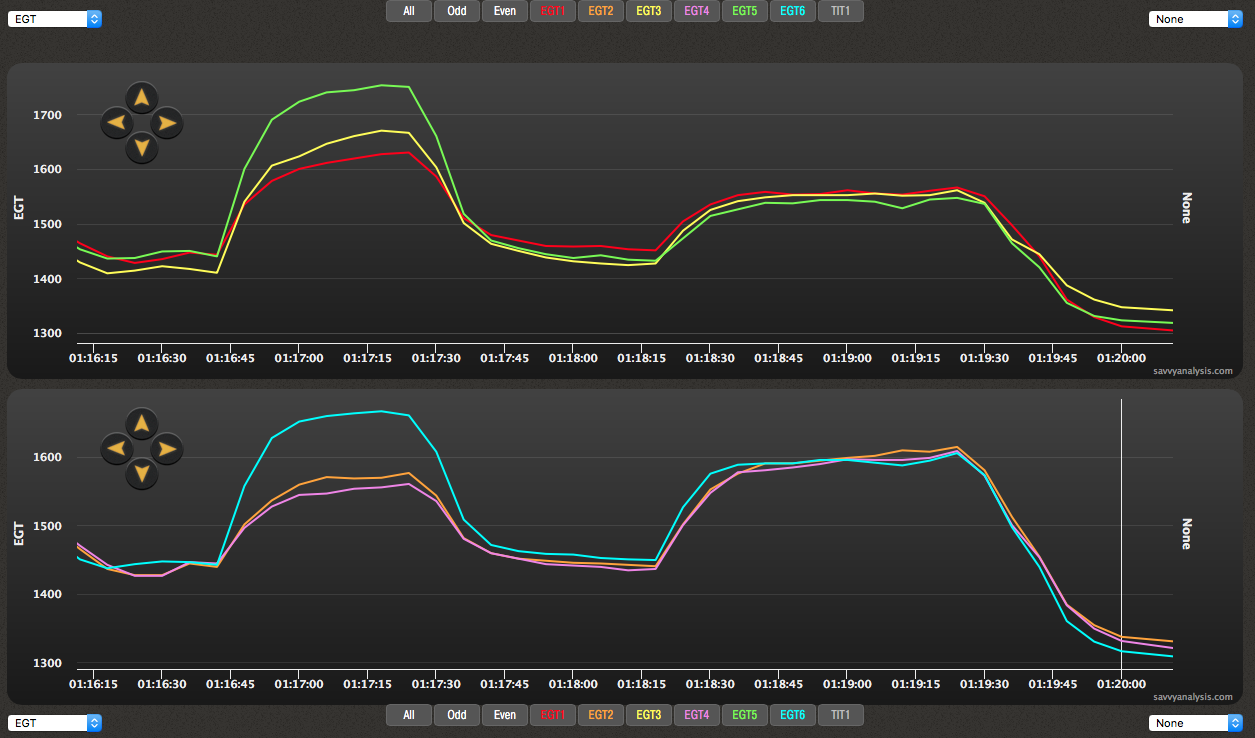 If it’s L mag first, we should be seeing the bottom plugs of 1-3-5 and the top plugs of 2-4-6. With closley timed mags, and the L mag first checked, odds should be higher first, and they are.

Let’s work backwards from the R mag. No evidence of misfires, EGTs are stable with a small gap. 2-4-6 peak about 1600, 1-3-5 about 50º below that. Now let’s get back to that L mag. Bottom plugs of 1 and 3 are a little higher than tops of 1 and 3 – as they should be. Let’s table the bottom plug of #5 for a moment and move to the evens – still on the L mag. 2 and 4 are a little lower than their bottom counterparts – as they should be. So four of the six cylinders suggest that mags are closely timed.

If we can get the bottom plug of 5 and the top plug of 6 to be lower, we should see an ideal EGT display during the LOP mag check. Our recommendation would be to check plug gaps for those plugs. This is a good reminder of why it’s important that FF not change from one mag to another during the check.

Next up is two flights from a Cirrus SR20 with a Continental IO-360 with FF overlaid on top. 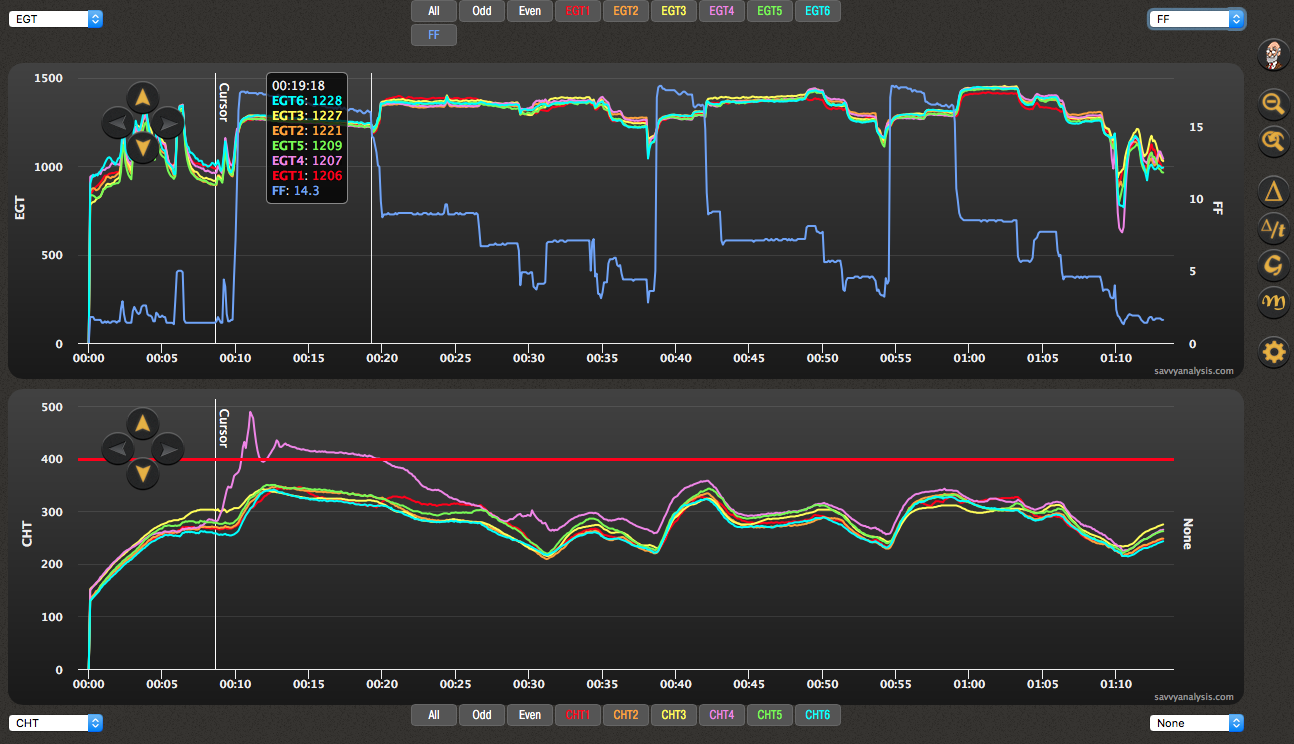 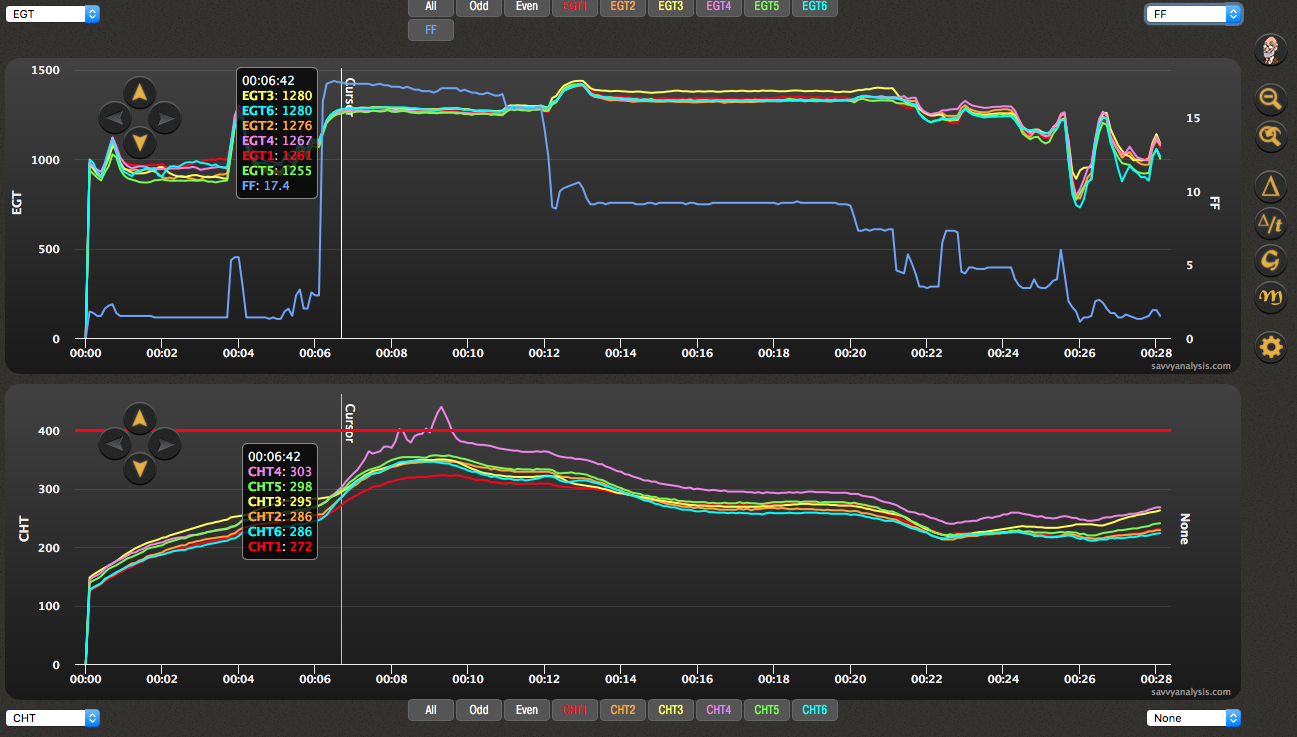 The issue is those spikes in CHT 4. Should we ground the plane? Borescope the cylinder? Let’s look closer. I have placed the cursor where the excursion begins on each flight. On the first of the two flights, it happens before takeoff, and it’s a fast climb to the peak. On the second flight, it happens after takeoff, it’s a slower climb and a lower peak. In both cases, there’s no corroboration of trouble in EGT 4 and in both cases, the peak is fairly short then CHT 4 tracks normally – but high.

It’s always wise to check the connection before replacing an EGT or CHT probe, but since the data is consistent here – no drops to zero – we’d say this is a failing probe. You can verify a failing probe by moving it to an adjacent cylinder and see if the anomaly follows the probe. In a case like this we’d be inclined to skip that step and move right to replacement.

In the past our auto-reply thanking you for uploading your data suggested that if your request was urgent, let us know. But we realized that  we still had to open and read the ticket to recognize the urgency. So we added a Priority button to the analysis request, and now we can spot those in the analysis queue. Our turnaround time for normal requests is 2 business days – but we’re usually faster than that – and our turnaround time for Priority requests is as soon as we can.

Let’s say you saw the high CHT 4 trace on the first flight above. When you land, you upload the data and request Priority analysis. You’re not looking for a full report – just another set of eyes to confirm your suspicion that it’s bad data and not a serious engine problem. We’ll act on those asap and try and get you on your way.