They say what goes around comes around. As the new year arrived and I began my 5th year of writing these Puzzlers, I wondered what I could do to keep things interesting and informative. You the reader and I, acting as your agent scrubbing the uploaded data for good candidates, are at the mercy of what gets uploaded. In the past we’ve had data for complete engine failures, fuel lines coming loose, broken con rods, bent push rods, valves failing in flight, alarmingly high CHTs, clogged injectors, GAMIjectors in the wrong cylinders, fouled plugs, bad mag timing – most of what can go wrong with a piston aircraft engine. Some were mechanical failures, some were the result of poor powerplant management, and some were maintenance-induced.

Sometimes I wonder what it would be like if I could take requests like a DJ at a wedding – but if I don’t have the data to work with I’m stuck. It does seem to be getting a little harder each month to find an article’s worth of trouble. I know from writing SavvyAnalysis reports that we see fewer examples of max fuel flow set too low than we used to. I’m not complaining – better maintenance is a good thing for each of us and for all of us. So the goal of this column will continue to be helping pilots recognize data anomalies in real time to make good decisions about the safety of the flight, and helping owners to make informed maintenance decisions.

I’m making two changes for 2019. First,  the screenshots embedded in the Puzzler will be 1200 pixels wide as they always have been. But if you click on the screenshot you’ll get a larger version – about 2.5 times the embed. Depending on your browser settings, the larger version link might open in a new tab, in a new window or might replace the article. If it does that, use your “back” button to get back to the text.

The second change is I’m enabling comments on this Puzzler. In IMC Club meetings we’re usually given a weather scenario, then at some point the moderator says “Would you continue, or divert, or declare an emergency and get on the ground?” I think we can use that format here. Choose one or more of the engine monitor scenarios and offer your opinion about what you would do when presented with that set of data. Maybe, probably, it’s different if you’re IFR or VFR, so feel free to embellish. We’ll try it this month and go from there.

Let’s begin 2019 with a Cessna 210 powered by a Continental IO-550-P with the Vitatoe conversion. Data comes from a JPI 730 with a 2 sec sample rate. I’m using my standard layout of EGT on top, CHT below that, FF below that, and in this case RPM and MAP are below FF. 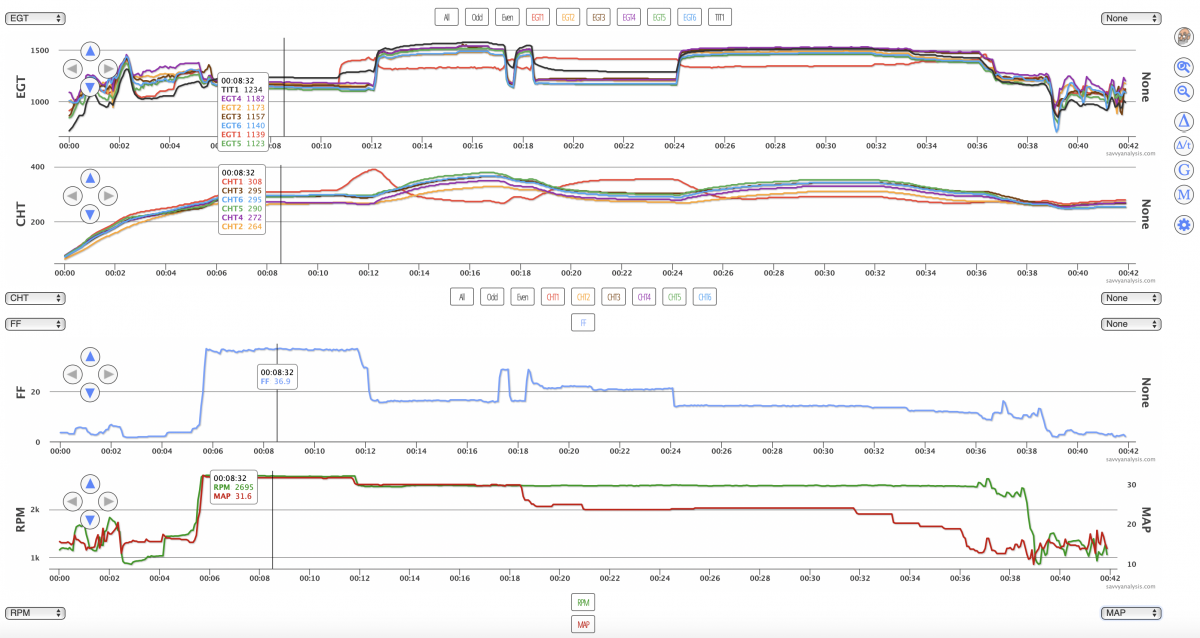 There’s nothing special about where the cursor is placed. EGT during taxi-out are not as tidy as they will become in initial climb. EGT 1 – the red trace – is well below the pack at idle FF. CHT 1 is highest in climb but only by a few degrees, and EGT 1 is not high until about the 11 minute mark. That’s where EGT and CHT 1 begin their excursion, with no change in FF, RPM or MAP. At the 12 minute mark, RPMs and MAP drop a little, and FF drops a lot. When FF drops, EGT and CHT 1 also drop, and at the 18 minute mark all three rise again, then drop again at the 24 minute mark.

If you’ve been following Puzzlers for a while, you know that this is a classic injector clog. If you’re new, here’s how it works. At max fuel flow the cylinder is getting enough gas to make power, but it’s running leaner than normal which sends EGT and CHT high. When FF is reduced, it struggles to make power which causes EGT and CHT to drop. For this engine and this particular clog, the horizontal grey line of 20 GPH through the fuel flow trace acts like a light switch. Below the line everything drops, above the line and everything rises. At the 34 min mark FF drops enough that the clog is less of a factor, and EGT 1 climbs back into the pack for approach and landing.

The low EGT 1 at idle suggests the clog was already at work, but temps look normal in initial climb, then EGT 1 jumps like somebody threw a switch. Again, if you’re new to this, EGTs can jump quickly because of the G – gas – but changes in CHTs take longer because of the thermal mass of a cylinder.

The smart move on the pilot’s part was to reduce FF. GPS ALT isn’t logged here, so we don’t know if that reduction occurred because of reaching cruise altitude, or in reaction to the event. Either way, CHT 1 drops when it happens.  Would you go back and land? Or as they did here, continue on?

Next is a Piper Pathfinder with a Lycoming O-540 (235HP) and data from a JPI 700 with a 6 sec sample rate. Again my standard layout of EGT, CHT and FF but this time that’s all we need.

This isn’t the entire flight – I’m zoomed into just before takeoff and through the set of mixture sweeps and the LOP mag check. The pilot did a great job of keeping a steady pace on the mixture sweeps, and because of that it’s easy to see that EGTs 1 and 2 peak first, then 3, then 6, then 4 and 5. So it’s not exactly front to back – or prop to firewall.

With a carbureted engine we expect the GAMI spread to be higher than with injectors, and typically it’s around 2.0 GPH. Partial carb heat often helps by disturbing the airflow. Carb temp isn’t logged on this JPI so we don’t know if it might have helped. I’m guessing it’s not on for the sweeps, because it’s hard to imagine this being an improvement. This might be the Worst. Distribution. Ever.

The O-540 operator’s manual comes with this note —  Lycoming O-540 series engines are equipped with a Marvel-Schebler MA-4-5 carburetor. Particularly good distribution of the fuel-air mixture to each cylinder is obtained through the center zone induction system, which is integral with the oil sump and is submerged in oil, insuring a more uniform vaporization of fuel and aiding in cooling the oil in the sump. From the riser the fuel-air mixture is distributed to each cylinder by individual intake pipes.

So oil level could be a factor, for that matter RPMs and density altitude could also have an effect – but wouldn’t those effect all cylinders equally? We think the low hanging fruit is to check the induction riser gaskets for cyl 1, then check cyl 2, then 3 and 6.

One last thing, since cyl 1 is running lean, we might see misfires on either or both plugs in the LOP mag check, and if you look closely at the right side of the chart, the red trace dips as each mag is checked. Not that we needed more evidence.

Now it’s your turn. Feel free to answer the questions posed earlier about what you would do when confronted with the sudden EGT and CHT rise in the first scenario. Or comment on how you react to suspicious engine monitor data – is it different if it’s in the runup before you launch, vs in initial climb or in cruise ? Is it different if you’re IFR or VFR ?